Witch It Update 1.3.0 Patch Notes (Dawn of the Potato)

Witch It game update 1.3.0 is now available to download on PC (Steam). According to the official Witch It patch notes, the latest Dawn of the Potato update added a new map “Flint Falls”, 20+ new props, and 18 new skin items.

Previously, a big update added a new faction, new creatures, new skills, and status effects. Unfortunately, since the last patch, players are facing various issues with the game. Today’s Witch It patch 1.3.0 will address a few of these issues.

Welcome to Dawn of the Potato, an era in which the first ever hunters built their potato-slinging legacy. Flint Falls is where it all began: a primitive encampment located at the foot of an enormous waterfall, containing both resources and witches plentiful.

Flint Falls is a primeval-themed map located in the clearing of a prehistoric jungle. A stunning waterfall towers over the map, connecting to a fast-flowing river that may pull you along if you’re not careful. Thick stone slabs on the surface mark the beginning of a civilisation, but also double up as great hiding spots for the witches – but for those who want some proper shelter, locate the cave system underground and see what you can find!

Feast your eyes on our new prehistoric props, including a tanning rack, makeshift stone furniture, and… is that a Luaq pelt?! The new props and Flint Falls map will arrive soon to Creative Mode.

Collect a pair of pants made from a leopard pelt, or maybe a broom made from the bone of a humongous dinosaur!

Want to obtain the new skin items? After completing or rerolling your current daily quests, new quests will have a high chance to reward Dawn Of The Potato items. 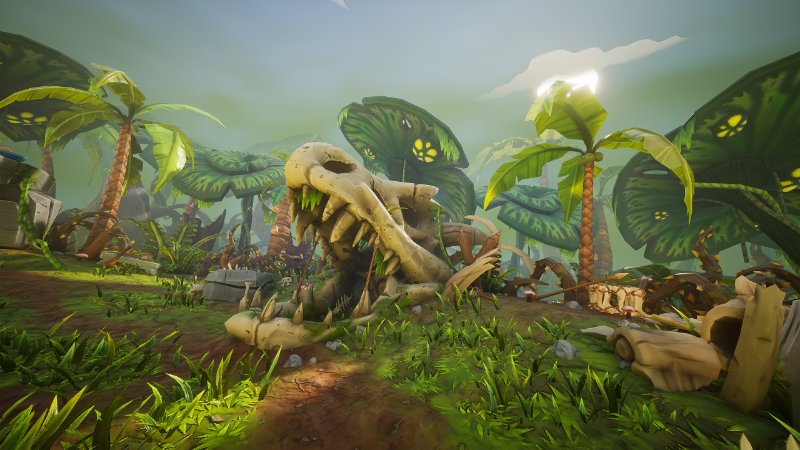 After completing or rerolling your current daily quests, new quests will have a high chance to reward “Dawn Of The Potato” items.