Previously, a major update added a new Void Gauntlet weapon, allowing you to manipulate the powers of the Void to support your allies and debilitate your enemies with this magical DPS/support hybrid.

Unfortunately, players are still experiencing several issues with the game. Today’s New World patch 1.2 will address a few of these errors. 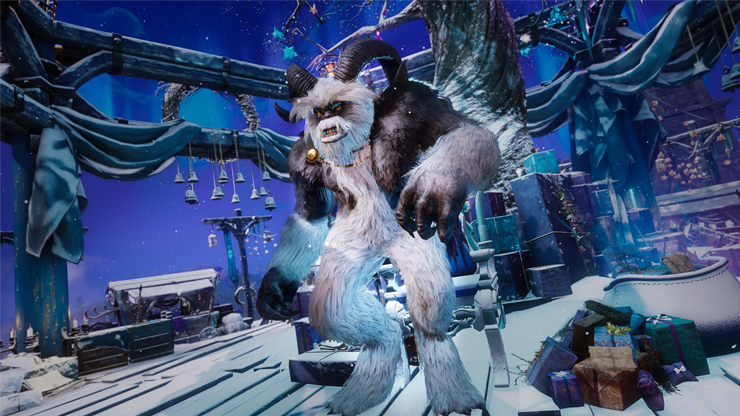 Icy winds and the Winter Wanderer bring with them new armors, weapons, furnishings, skins, consumables, and a delightful “present gifting” emote; all themed off the wonderful Aeternum holiday of Winter Convergence!

The Winter Wanderer has set up four villages to facilitate the joy and cheer of Winter Convergence! Visit these villages in Everfall, Monarch’s Bluffs, Weaver’s Fen, and Brightwood to meet the Winter Wanderer and carry out his holiday quests! 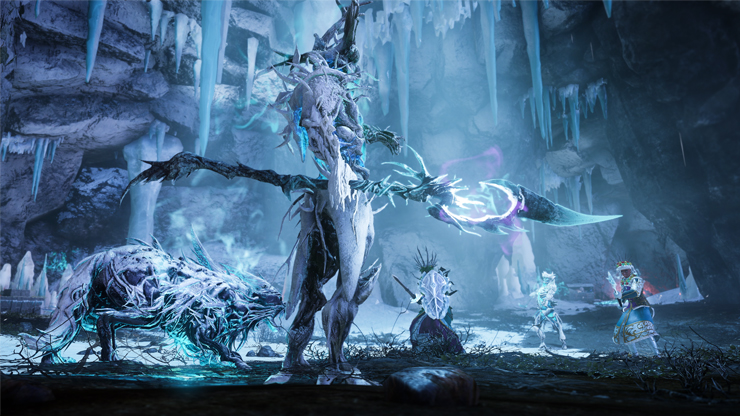 Ice Caves are appearing all over Aeternum due to the Winter Warrior’s desire for a Forever Winter. They are snowy and icy caves that the yeti uses to make snow fall. The rest of Aeternum will look like these Ice Caves if the onslaught of the Warrior is not stopped. These caves will remain behind after the event as scars on the land, sources of wintry magic that refuse to melt even if the Warrior is defeated.

In addition to the new quest series offered by the Winter Wanderer for the Convergence Festival, there are also several new “side story” territory quests offered in Restless Shore and Mourningdale. This update also introduces a new quest series associated with Housing. After you’ve completed the Main Story Quest “Encroaching Corruption,” seek out Architect Giacomo Altoviti near your starting settlement to begin the quest series. Further quests with Giacomo Altoviti will be unlocked as you level up and progress your Territory Standing.

New quest categories have been added to the Journal for “Epic Weapons and Armor” quests and for “Skill Progression” quests. This update is accompanied by new map pins for all quest types.

Based on feedback on the High Water Mark system and our desire to have a compelling and diverse end game, we’ve made some major updates to the end game. We’ve added a new resource called Gypsum that can be acquired each day by doing a variety of activities (open world named bosses, expedition bosses, outpost rush, arenas, corrupted breaches, etc.). Each activity rewards a different type of Gypsum that can be crafted into a Gypsum Orb. These Orbs can then be crafted into Gypsum Casts of any weapon, armor or trinket type. Opening a Gypsum Cast will guarantee an expertise bump and gear of that type.

We’ve also renamed High Water Mark to Expertise and now display the current Expertise level of each slot on your avatar in the inventory, so players can easily track their progress. We also show a level up banner anytime your Expertise level increases.

Lastly we’ve added 2 new end game POIs were players can challenge themselves with difficult content and try to progress their Expertise with level 66 enemies and elite chests. Both Malevolence in Edengrove and the Imperial Palace/North Dynasty Shrine have been up-leveled to 66.

We want to continue rewarding the efforts you make to craft items for yourself, your friends, or to make a buck on the Trading Post, so we have introduced Trade Skill Aptitude!

Earning Trade Skill XP will begin progressing you again, and when you reach one of these markers, you will be awarded with a container of useful items that are (mostly) trade skill relevant, such as Craft Mods, special ingredients, and even schematics and recipes!

Due to an issue in our initial PvP damage formula that caused lower gear to be more beneficial in damage mitigation, we have updated our formula. We look forward to hearing your feedback on this update.

Tuned down the general chances of getting an Expertise bump to compensate for the guaranteed bumps that were added with Gypsum. Elite chest odds were reduced a little and open world bosses were reduced a lot. Expedition Bosses remain the same.

Made a number of adjustments in the end game difficulty to compensate for some accidental overtuning we did in the November patch. Our goal is to find a middle ground between the end game content being too easy before November and the overtuned HP sponges we had afterwards.

Due to an issue in our initial PvP damage formula that caused lower gear to be more beneficial in damage mitigation, we have updated our formula. We look forward to hearing your feedback on these changes.

A general consistency pass has been done across all weapons to adjust the buffering windows for dodges, abilities and basic attacks. The updated buffer windows starts on the first frame of the attack that would deal damage or on the first casting frame in the case of abilities that do not deal damage.

Improved all Aim Down Sights transitions between abilities and primary shot. This also addresses an issue that prevented Penetrating Shot and Poison Shot from being canceled after exiting the shots.

Enduring Strike: The Grit windows for attacks empowered by this passive ability have had a consistency pass to make sure that they only last until the end of the strike windows.

We want to continue rewarding the efforts you make to craft items for yourself, your friends, or to make some coin on the Trading Post, so we have introduced Trade Skill Aptitude.

Earning Trade Skill XP will begin progressing you again, and when you reach one of these markers, you will be awarded with a container of useful items that are (mostly) trade skill relevant, such as Craft Mods, special ingredients, and even schematics and recipes!

A number of fishing armor items are now eligible to be bought and sold on the trading post. These are all items that a player could potentially not get during fishing quests as the reward boxes sometimes roll 1 piece out of 2 or 3 at random. This update ensures that all players have access to all pieces of armor to complete every set, if they wish.

Fixed an issue preventing forms of tallow from being used as a crafting mod when crafting items. (The relevant perks are: Accuracy, Mortal Refreshment, and Refreshing Toast).

Gypsum is now rewarded for completing an event, rather than given in the reward cache from the event. A few activities such as Outpost Rush, Corrupted Breaches, Arenas, and Aptitude granted Gypsum in the reward cache in the PTR. This leads to hoarding and uncertainty if using a cache is past the cooldown timer. This change should resolve both of those concerns.

Removed corrupted shards and lodestone as necessary components for crafting Arena Keys and added 5 runestone to their recipe. We did this to make Arena Keys not fight for the same resources as Expedition Keys.