Today’s MS GBO2 update 1.46 will address a few of these issues. Check out more details below. 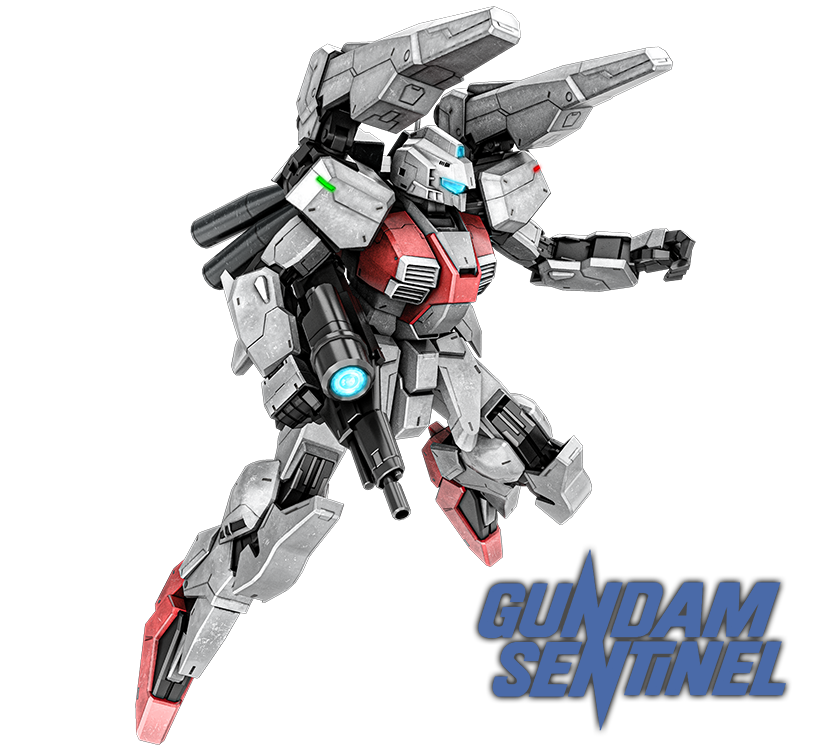 New MS “Nero Trainer Type” from “GUNDAM SENTINEL”
“For ground / space” “Cost: 450” “Raid unit”!
Here are the MS settings and performance ahead of the official release.
<MS setting>
・ From “GUNDAM SENTINEL” “For ground / space” “Cost: 450” “Raid unit”
・ Anaheim Electronics has taken over the concept of the GM.
A variation of the equipment for the Earth Federation Force mass-produced MS Nero, which was developed based on the latest Gundam type.
・ The name “trainer” is not a meaning of MS for training.
It is a high capability MS that has been trained in combat as a simulated enemy MS with highly skilled pilots of the commander class on board.
・ As a raid unit, it offers a wide range of capabilities, including mobility.
It can handle a variety of battle situations by using its ranged armament that mixes beams and live ammunition, and its skill “Heavy Attack” for close combat.
・ Equipped with the skill “Reverse” to rapidly turn the MS while moving at high speed.
* This video may not be representative of the actual product.
■ New feature “Enhancement boost” in Hanger
I have a good news for you all pilots!
Leona LeCraft, the person in charge of the Hanger, has implemented an additional feature “Enhancement boost” !

Up until now, up to 14 “Mechanics Tickets” could be used at the Hanger at one time, but this “Enhancement boost” will allow you to increase the enhancement value obtained at one time by adding more tickets to the number of tickets used when enhancing the MS.

That means when you tried to enhance the system with a mechanic increase ticket in the past, you had to repeat “put it in the hangar => take it out => looping …”, but with this addition function, you don’ Hope you all like this new feature!
■ ZZ Gundam major updates
ZZ Gundam fans, here I come!
In response to all pilots’ great feedback, we have recreated a completely new ZZ Gundam.
As a result, we have been working on the new model at the same time, and thank you for all patient waiting.
Because of this, we were able to transform it into the “G-Fortress Form,” which was a particularly popular request!
This will increase the number of tactical options and attacks compared to the previous ZZ Gundam.

We also implemented the “Double Cannon” on the back, which was the second most requested feature!
In the original anime, it was only shown firing straight up, but by taking advantage of the transformation gimmick, we have made it possible to shoot horizontally ..

For those of you who have been using the ZZ Gundam in its current form, we apologize for the change in feel, but we hope you will enjoy using the new ZZ Gundam once again with the new feeling.
* We will also make other minor adjustments based on battle record data.
■ Notice about banning several account as the harassment behaviors
This is a delicate issue for an online game, but we would like to inform you of the management’s policy.
GBO2 players who have been found to have been repeatedly causing trouble and disturbance despite receiving warnings from the administration  will be permanently suspended from the game.
Although the number of players causing trouble has been decreasing, we have decided that as we have to improve the situation with this frequency, so we will basically be doing this every month from now on until the number of accounts causing trouble and disturbance settles down. We will also be tightening the conditions under which warnings and suspensions will be issued.
Although we have seen a tendency to weasel out of such responses like “a cat-and-mouse game” with management team in other titles, we will proceed in this manner in order to achieve an environment that allows normal gameplay.
■ HAPPY HALLOWEEN 2021! !! 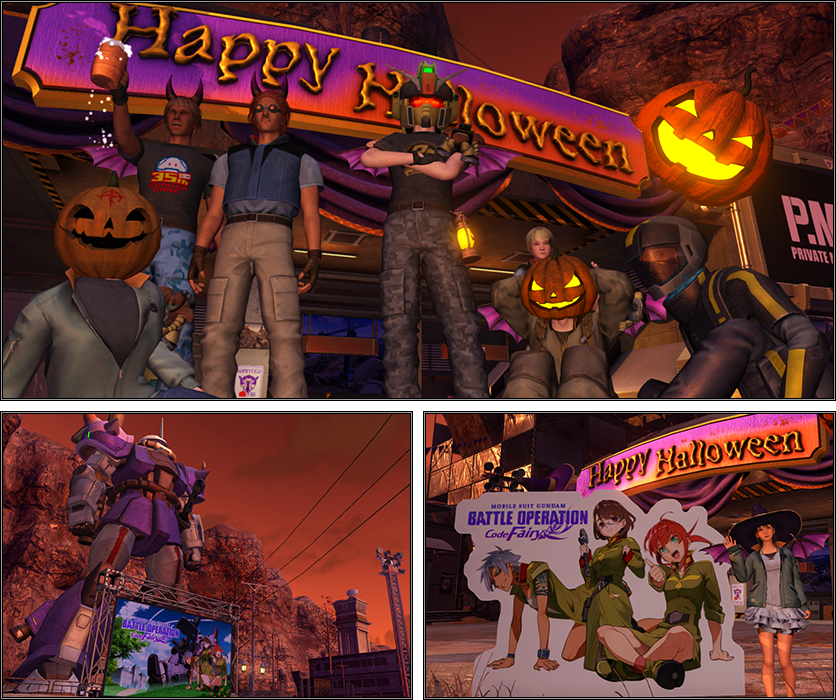 Well, you all know that the base camp will be decorated to the Halloween style, and this year … we have Code Fairy’s characters and MS there!
Also this year, Tenda’s prankster hid “something” in the base camp.
Could you just … stop Tenda, seems Tenda really wants to put this to be the tradition …
This time is Code Fairy’s team mark “Noisy Fairy” .
You will see this mark in the camp everywhere. 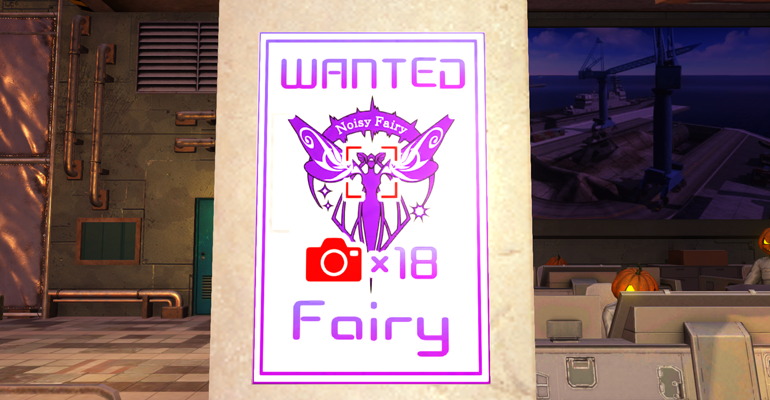 If you can investigate every inch of the base camp and capture every mark in camera mode (activated by touchpad button), you will able to get “Mark: Kyrie Garrett” which is only available here.
The distinctive mark of the design is the Harpy , which appears in mythology.

And “Limited Time Missions” are initiating again!
If you complete the mission, you will receive the new MS “Gigan [Space]” , a space-only support unit with a cost of 250. 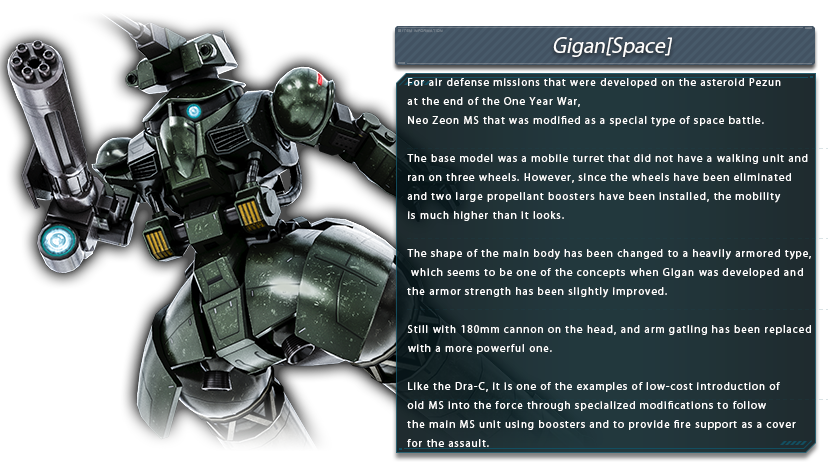 Furthermore, you will also receive the “some kinds of headgear” worn by the terrorist in a “story”! If you really like to be a Mufti, please try to get one.

Have a great Halloween this year too!
* There will be reports of their discovery on social media after the event, to avoid spoilers and try to find them with your friends or clan members!
■ Code Fairy Collabor