Fallout 76 update 1.68 is now available to download on PS4, PC, and Xbox One is now available for players. According to Fallout 76 1.68 patch notes, the latest update added a new Halloween and Bombs Drop event that’s bringing Spooky Scorched and trick-or-treating to the Wasteland. Apart from this, FO76 patch version 1.68 also includes various bug fixes and changes.

Previously, a big update added creature balance adjustments for One Wasteland and a few bug fixes.

Unfortunately, since the last patch, players are reporting several issues while playing the game online. Today’s Fallout 76 version 1.68 will resolve a few of these issues. Check out more details below.

Added new items into the Atomic Shop to release over the coming weeks, addressing a number of bugs, and kicking off a brand-new Challenge event for the 25th Anniversary.

TRICK OR TREATING AND SPOOKY SCORCHED

Starting October 25, you can hunt down costumed Scorched throughout Appalachia to loot Mystery Candy, Spooky Treat Bags, and of course, legendary items. Track down Scorched at their usual haunts, keep an ear out for their spine-tingling sounds, and you’re bound to find at least a few who are dressed up for Halloween.

In addition, C.A.M.P.s that feature a pumpkin icon on the map are welcoming sweet-toothed trick-or-treaters who are in search of some candy. Don your favorite costume and collect Mystery Candy from Spooky Candy Bowls at other Dwellers’ Haunted Houses. You can also invite trick-or-treaters to your C.A.M.P. by claiming a free Spooky Candy Bowl of your own, which will be available in the Atomic Shop for the duration of the event.

Place your Spooky Candy Bowl with Mystery Candy you’ve collected from Spooky Scorched or train station vendors. Whenever you trick-or-treat or give out candy to trick-or-treaters, you’ll earn progress towards Halloween-themed Challenges, which you can complete to earn rewards until November 8.

HUNT FOR THE TREASURE HUNTER!

Moleminer Treasure Hunters have been spotted around Appalachia, searching Legendary loot to add to their collection. Listen carefully for their unique sounds as you explore, as these reclusive Moleminer’s are skittish compared to their above-ground counterparts. Claim their Moleminer Pails loot for yourself, or purchase pails from any robot vendor.

HUNT FOR THE TREASURE HUNTER DETAILS

TAKE DOWN THE SPOOKY SCORCHED

Though the Scorched have lost much of what once made them human, it seems they’ve managed to retain some semblance of fondness for certain holidays. In fact, as Halloween approaches, they’re wriggling into creepy costumes and have even begun collecting sweet treats they’ve stumbled upon. From October 19 – November 2, you’ll occasionally run into these “Spooky Scorched” during your adventures in Appalachia. Each one will spawn as legendary, and taking them down will net you with a legendary item and a piece of Mystery Candy. You’ll also receive a Spooky Treat Bag, which you can open to receive rewards like consumables, ammo, and even a chance at some Halloween themed loot! 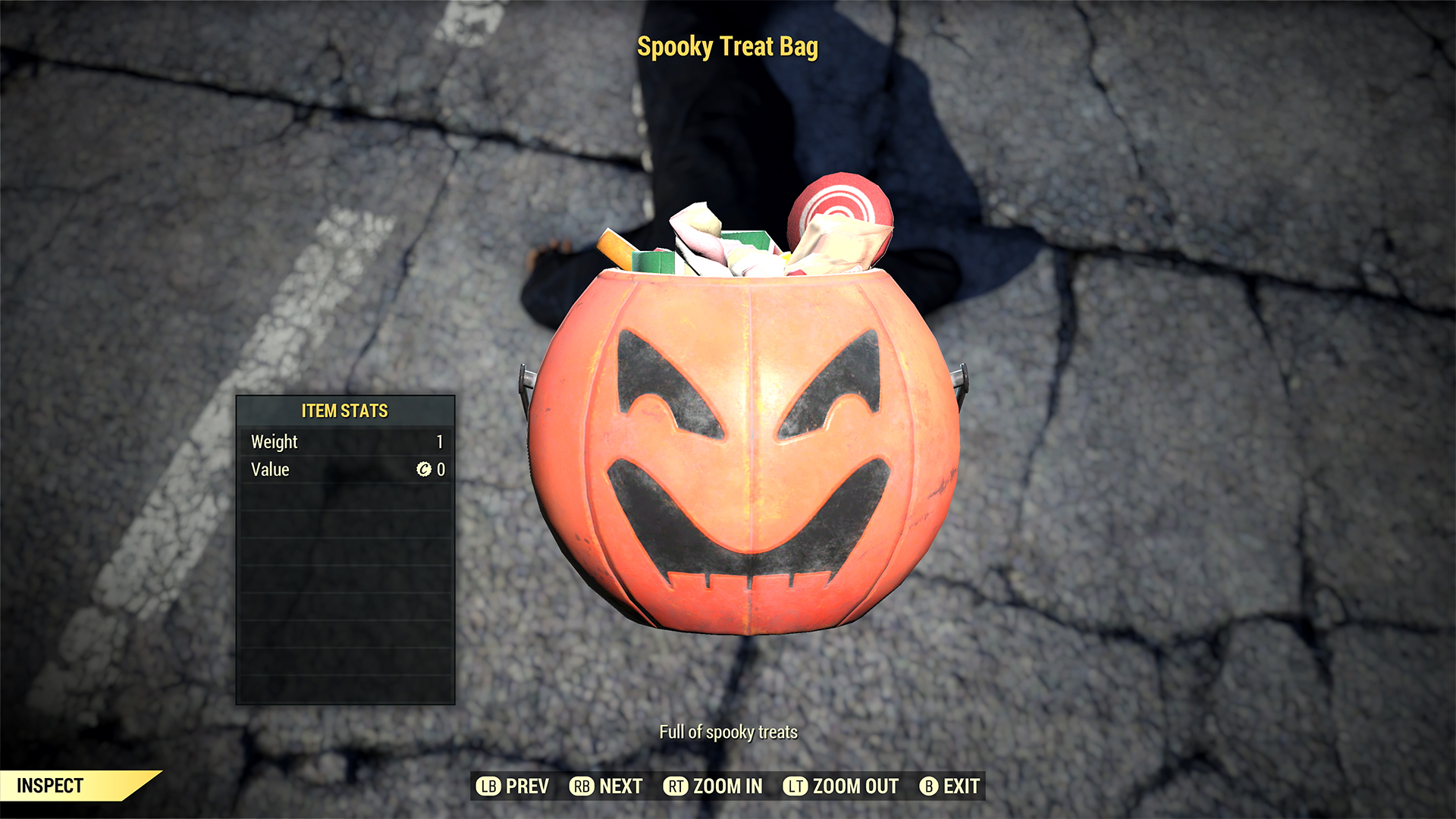 If you’ve got a sweet tooth, the Mystery Candy you’ll get from Spooky Scorched may seem enticing in the moment—especially because eating it will grant you with one of five random special buffs. However, you may want to bring a few pieces back to your C.A.M.P. for any visitors who stop by during the next couple of weeks…

Before the bombs fell, there was nothing quite like dressing up as your favorite comic book hero, storybook princess, or gruesome monster on Halloween, and going door-to-door with your closest friends on the hunt for some delicious sweets. This year, you can recapture some of that magic by raiding your wardrobe for a costume and trick-or-treating your way around Appalachia!

Starting October 19, everyone will be able to claim a free Spooky Candy Bowl from the Atomic Shop, place it in their C.A.M.P.s, and fill it with Mystery Candy they’ve collected from Spooky Scorched or purchased from train station vendors. Until November 2, all Dwellers will receive Daily Challenges to trick or treat at others’ C.A.M.P.s, as well as Daily and Weekly Challenges to hand out treats from their Spooky Candy Bowls. Each of these Daily Challenges that you complete will grant you one of several possible rewards, like a consumable item, Perk Card Pack, Lunchbox, Repair Kit, or some S.C.O.R.E. Additionally, Weekly Challenges to give candy to trick-or-treaters can award you S.C.O.R.E., rare crafting materials, or even Halloween costumes. If you manage to complete both Weekly Challenges, you’ll also receive the new Popcorn Machine that you can build in your Appalachian abode.

Remember to transform your home into a horrifying haunted house that will give your visitors a scare, and be sure to place your Spooky Candy Bowl where others can easily find it. Don’t worry about folks snatching all of your sweets in one go, either. Each Dweller will be limited to one piece of candy from your bowl per hour. Finally, just like in real life, you’ll need to be in costume in order to trick or treat successfully, so be sure to wear your most festive apparel when visiting others’ C.A.M.P.s.

Though a sugar-fueled Halloween is looming just around the corner, there is another important occasion that we remember at this time each year. Bombs Drop Day is a grim reminder of how the world changed forever on October 23. However, it’s also a cause for celebration, because despite the odds, you’re surviving, thriving, and making post-apocalyptic Appalachia your own. Join us in commemorating Bombs Drop Day with sales on Fallout 76 and Atoms, as well as several upcoming weekend events.

Spooky Scorched Are on the Prowl

Halloween is almost here, and some of the Scorched are getting into the spirit of the season by dressing in their most festive costumes as they creep around Appalachia! From now until November 2, whenever you spot “Spooky Scorched” during your adventures, or hear their spine-chilling holiday sounds, it’s time to go on the hunt.

The Scorched won’t be the only ones haunting the Wasteland this Halloween! From now until November 2, you can dress up in costume to go trick-or-treating around Appalachia with your friends, and even give out candy to trick-or-treaters who visit your home. Along the way, you’ll be able to complete new trick-or-treating Challenges to earn rewards.

Pass Out Candy to Trick-or-Treaters

Visit the Atomic Shop to claim a free Spooky Candy Bowl before November 2, build it in your C.A.M.P., and fill it with Mystery Candy for trick-or-treaters to enjoy.

Your C.A.M.P. will display a pumpkin icon on the Map once you’ve added Mystery Candy to your Spooky Candy Bowl, which will let other Dwellers know they are welcome to stop by for a treat.

Over the next two weeks, you will receive Daily and Weekly Challenges to give out candy, which you can complete to earn rewards!

Go On the Hunt for Candy!

Dust off your favorite costume, grab a few friends, and leave space in your pack for plenty of candy, because it’s time to trick or treat your way around the Wasteland!

Each day until November 2, you will receive a new Daily Challenge to trick or treat at other Dwellers’ C.A.M.P.s.

Make sure you’re wearing a costume when you take Mystery Candy from someone else’s Spooky Candy Bowl to ensure you’ll receive Challenge credit.