Elite Dangerous update 7 is now available to download for PC players. According to the official Elite Dangerous patch notes, the latest update addressed a number of issues and implement some quality of life improvements to the Galaxy. Apart from this, Elite Dangerous Odyssey update 7 also includes various stability fixes. Today. Elite Dangerous Horizons ‘Quality of Life’ update is also released

Unfortunately, since the last patch, some players are experiencing issues while playing the game. Today’s Elite Dangerous Odyssey patch 7 will fix a few of these issues.

1. Lighting and Illumination in Odyssey

Made additional changes to areas such as Fleet Carriers and exterior station lighting.

We’ve been monitoring your feedback following Update 6 and we are now satisfied that this issue has been largely resolved. This item will be marked as fixed with the final changes set to arrive in Update 7 – if you see specific instances please contribute to the issue tracker giving specific feedback.

Further improvements have been made in this area including optimisations to the Navmesh, lighting system, terrain, NPCs, glass shaders and scatter rock LODs. Our core code team is making good progress on more substantial optimisations, a number of which we expect to be included in Update 8.

4. Nothing to do on long shuttle rides

Update 7 will provide the opportunity for players to redirect Apex shuttles in transit, avoiding instances of players feeling trapped into long journeys. We will look to mark this issue as fixed in line with Update 7, freeing up your votes to contribute to other issues.

We have identified a cause and are deploying a fix for this issue in Update 7, to ensure the fix has worked as intended, we will leave this issue open for a time. We would like to thank you for your patience with this issue and for your support in helping us to resolve it.

Update 7 will include changes to the games Navmesh which we believe resolves any potential performance impact from update 5. We will therefore be marking this issue as fixed following the release of Update 7 whilst retaining our wider focus on improving Odyssey’s performance.

The following issues will also be resolved in Update 7:

In addition to Odyssey Update 7 we’re pleased to confirm that a number of these fixes and QoL improvements will be deployed to Horizons players on both PC and console in September – we will of course share full patch notes for both around release.

Please note: These are at varying stages of progress. This is not an exhaustive list of everything that is being considered. They are not final, so they are subject to change. We will keep you updated with news and details as they progress, and we expect the content to release over the coming few updates. With that said, here’s a look at just some of the features and content in consideration, to go alongside the other development work required for future updates.

The following items are planned to be included in Update 7 which is scheduled for mid-September:

Since the launch of Odyssey, many brave Commanders have dropped into Odyssey’s Conflict Zones to support their chosen faction in ongoing conflicts throughout the bubble. With Update 7 we’re taking Conflict Zones to the next level by rebalancing the sphere of combat, increasing the risk for airborne Commanders and introducing new gameplay for those on the ground.

Each active Conflict Zone will have new anti-air turrets to defend against airborne attack. Commanders in the air will need to work with those on the ground to disable them. In addition, AI ships will also be deployed to Conflict Zones for the first time, allowing Commanders to experience exhilarating in-atmosphere dogfights as the battle rages below.

You can see both of these in action in the video below:

Following the deployment of Enforcer units to Odyssey’s military installations, we’ll be introducing rocket launcher equipped infantry to active Conflict Zones, increasing the risk for any Commanders hoping to pick off easy prey from the comfort of their SRV.

These screenshots show some of the variation added for Update 7, making station interiors more clearly linked to their installation type. Changes include elements such as swapping out railings with alternatives, replacing crates and planters with other props to better suit the theme, using different partitions and wall pieces, swapping beams and roof sections, and adding pipes or more industrial looking geometry. 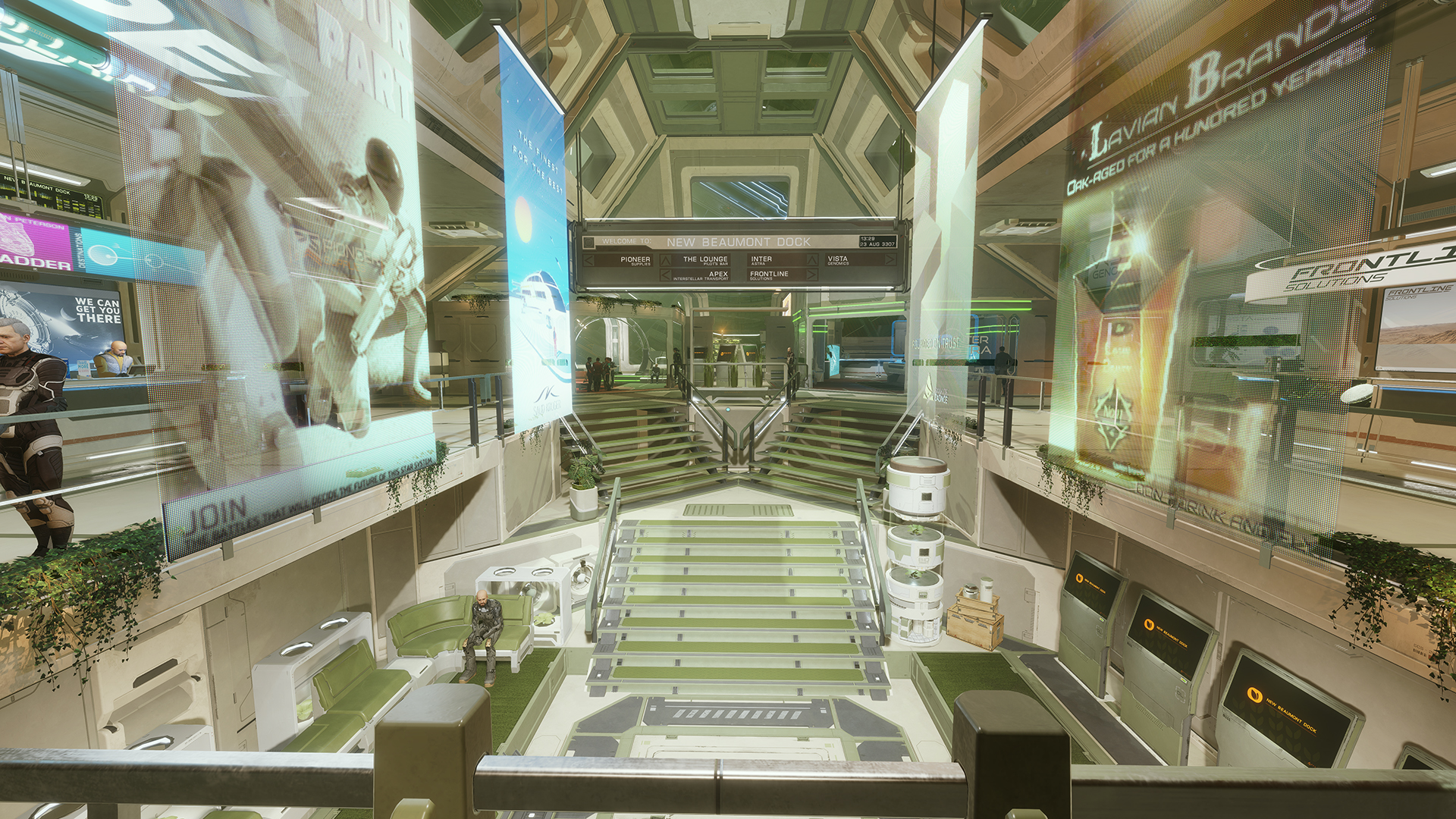 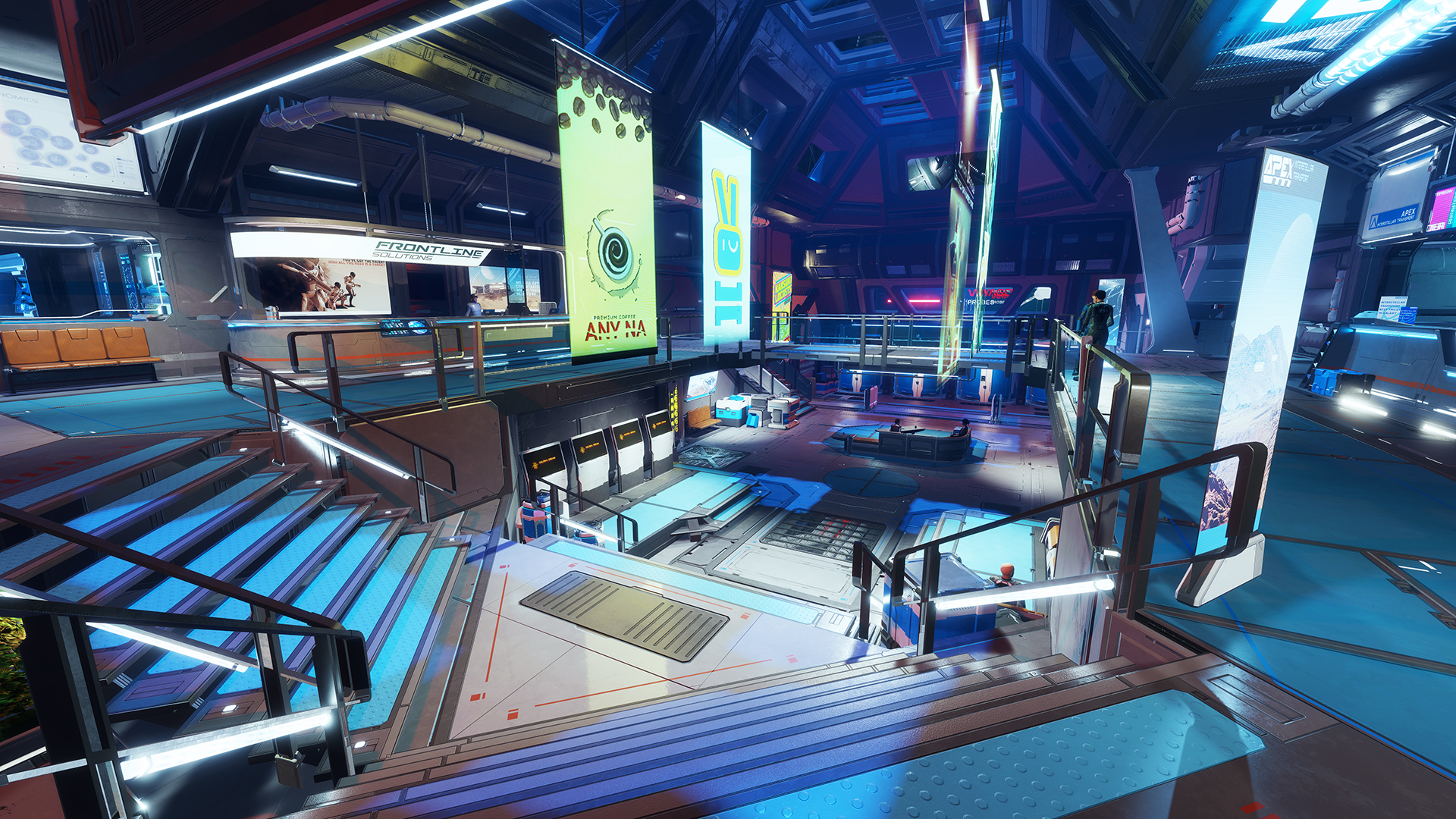 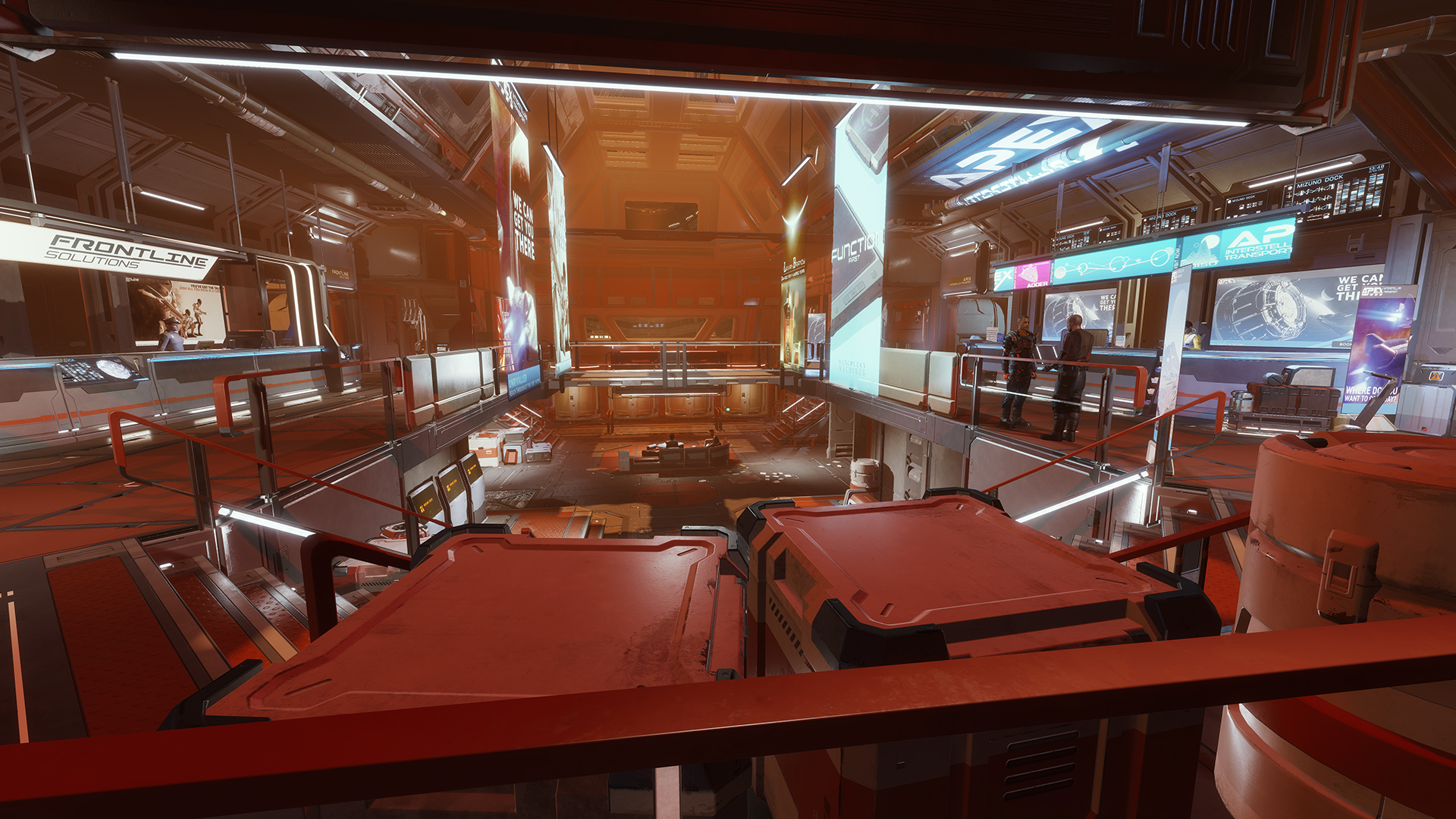 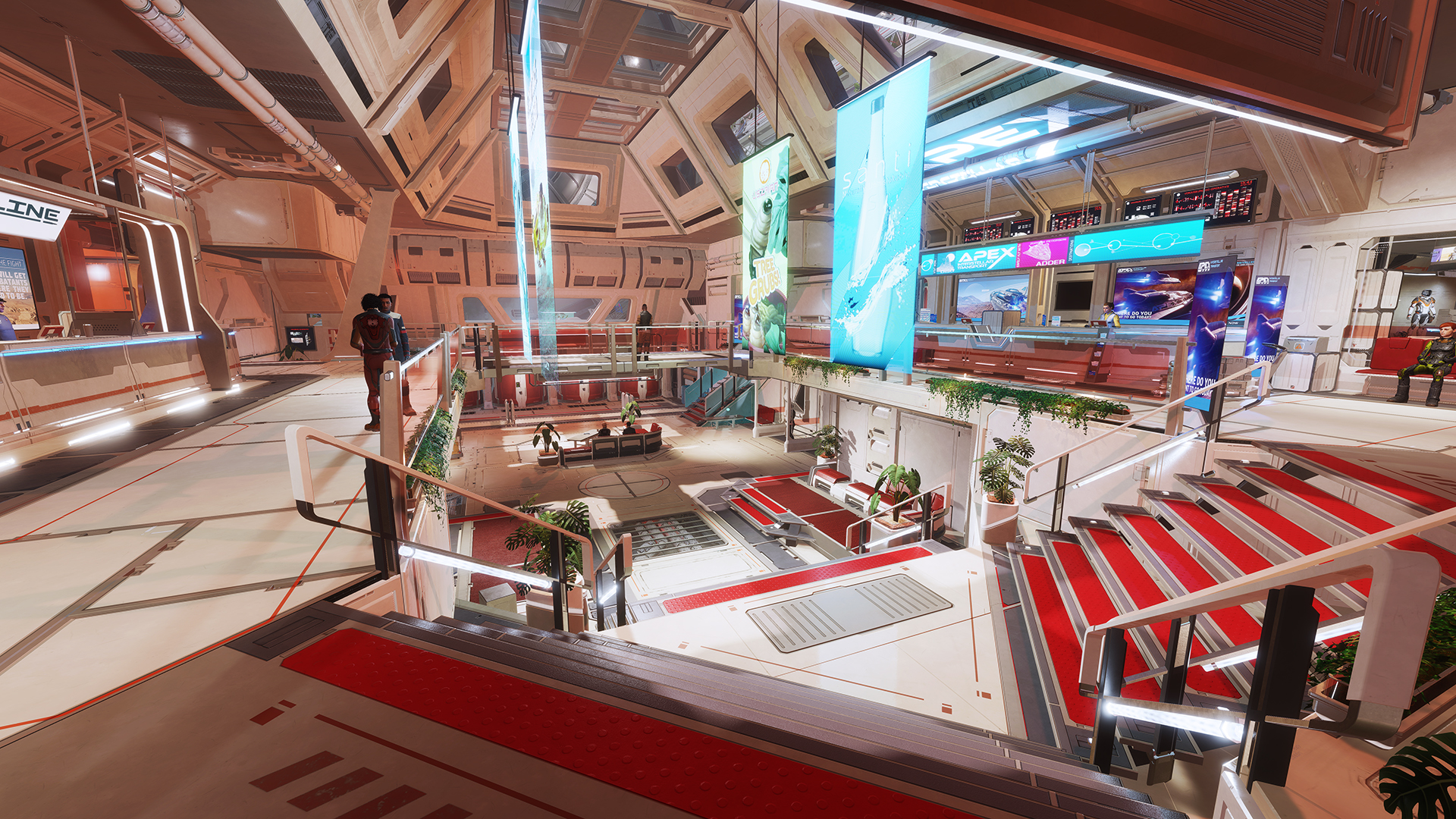 In addition, wealthy services and high tech stations now show less rubbish and junk on the floors, while the agricultural, industrial and asteroid stations are progressively more untidy.

You’ll soon be able to redirect your Apex shuttle mid-flight. Our UI team have been hard at work to make this a seamless experience with redirection options from the Navigation list, Galaxy and System Maps 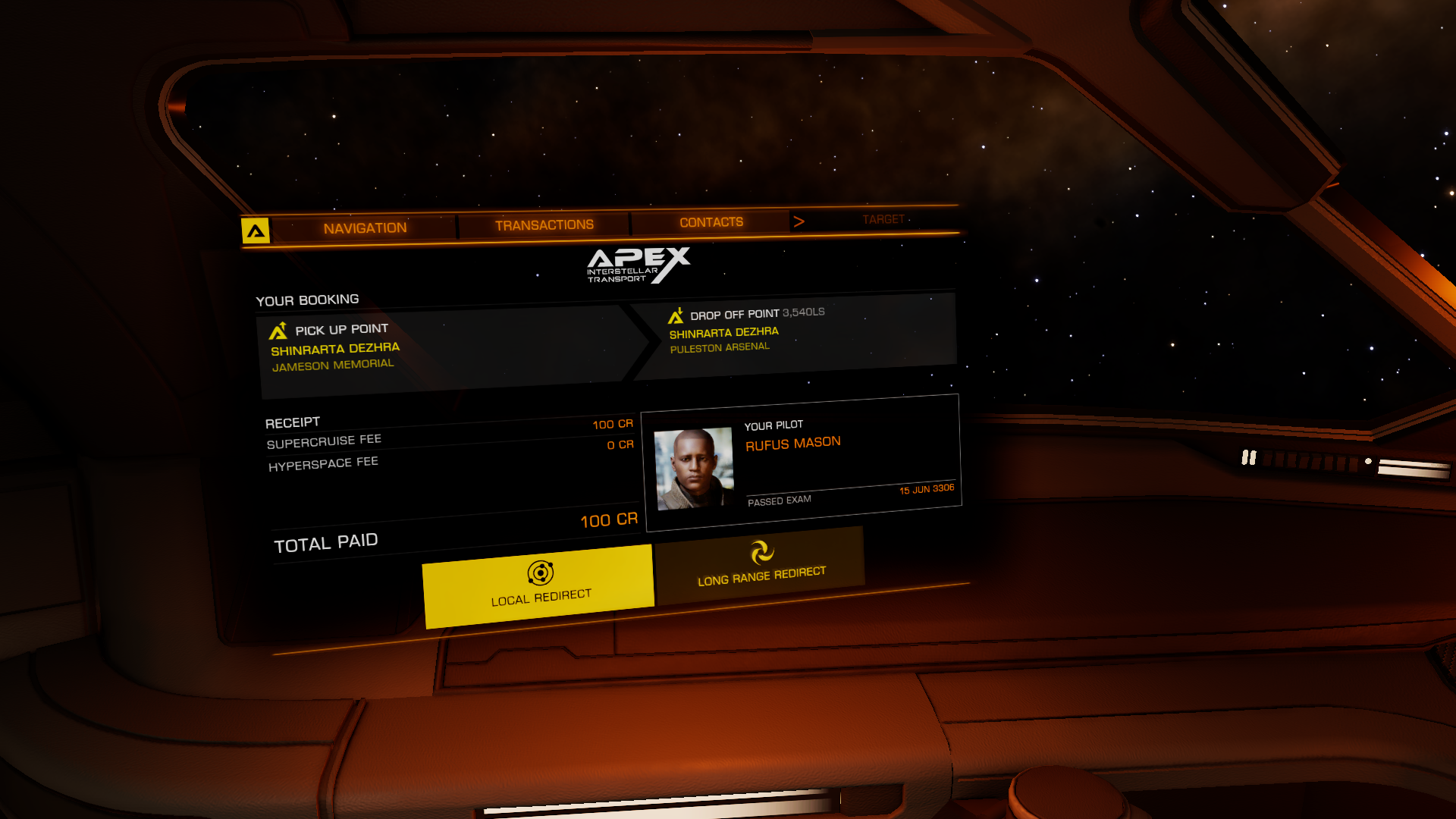 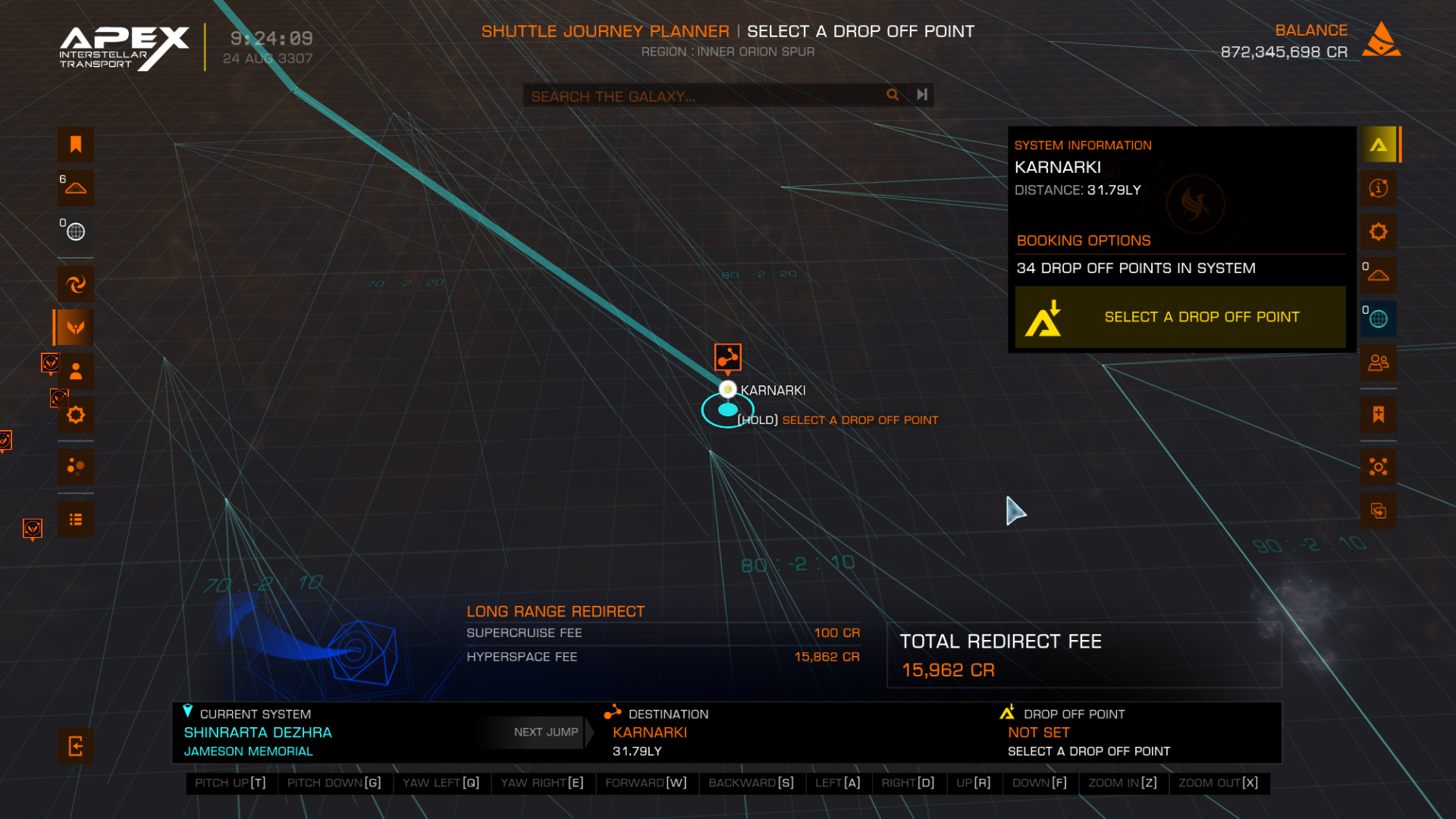 Stored module and Bookmark limits will be increased from their previous limits to 200. We are pleased to be able to deliver this community request.

By popular demand, AMD Fidelity FX CAS will be reintroduced as an option in Update 7. This is mutually exclusive to FSR which has its own integrated RCAS system.

Here is a selection of the other features currently in development. As mentioned above, this is not an exhaustive list of everything that is being considered. They are not final, so they are subject to change. As we get closer to their release we will announce which of these will be included in each Update:

Our character team have been hard at work overhauling Horizon’s flight suit cosmetics to make them compatible with Odyssey’s EVA suits. While we still have a little way still to go, you can see some of the results which we plan to bring to the game soon, below. 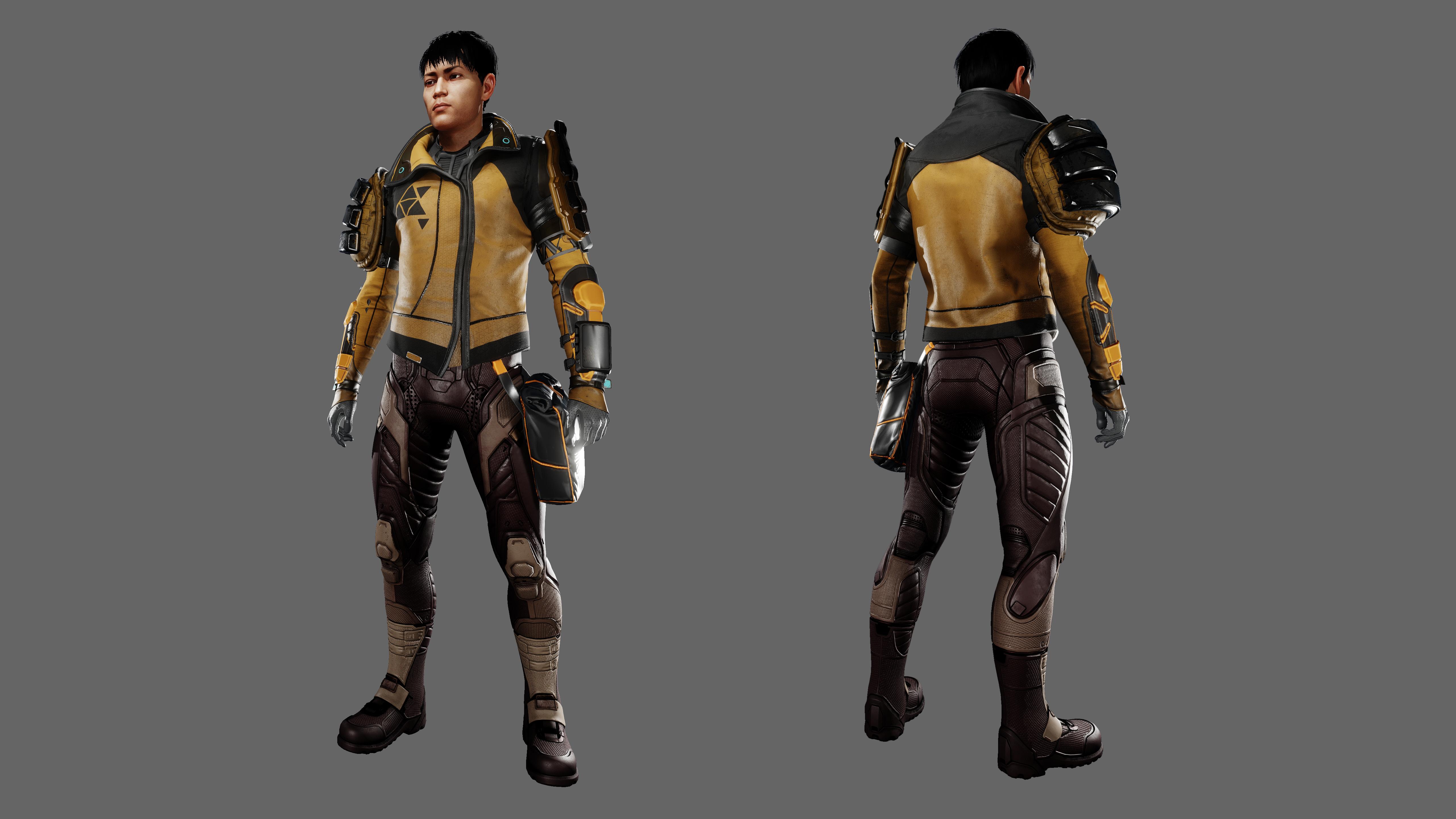 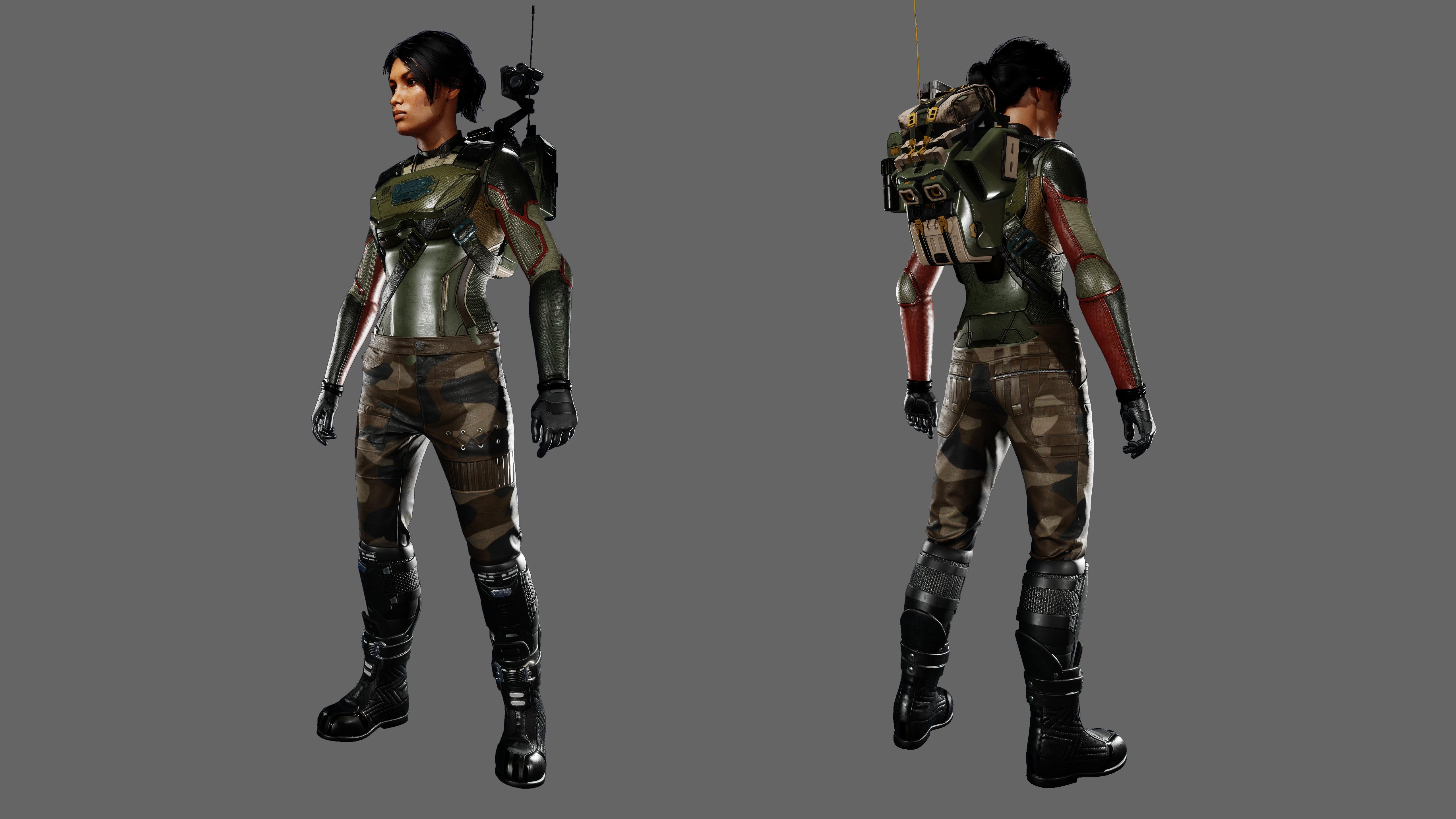 We’re pleased to share that we are making great progress on this feature, with a number of ships now in test with four Commanders on the bridge. More details will be released closer to release. 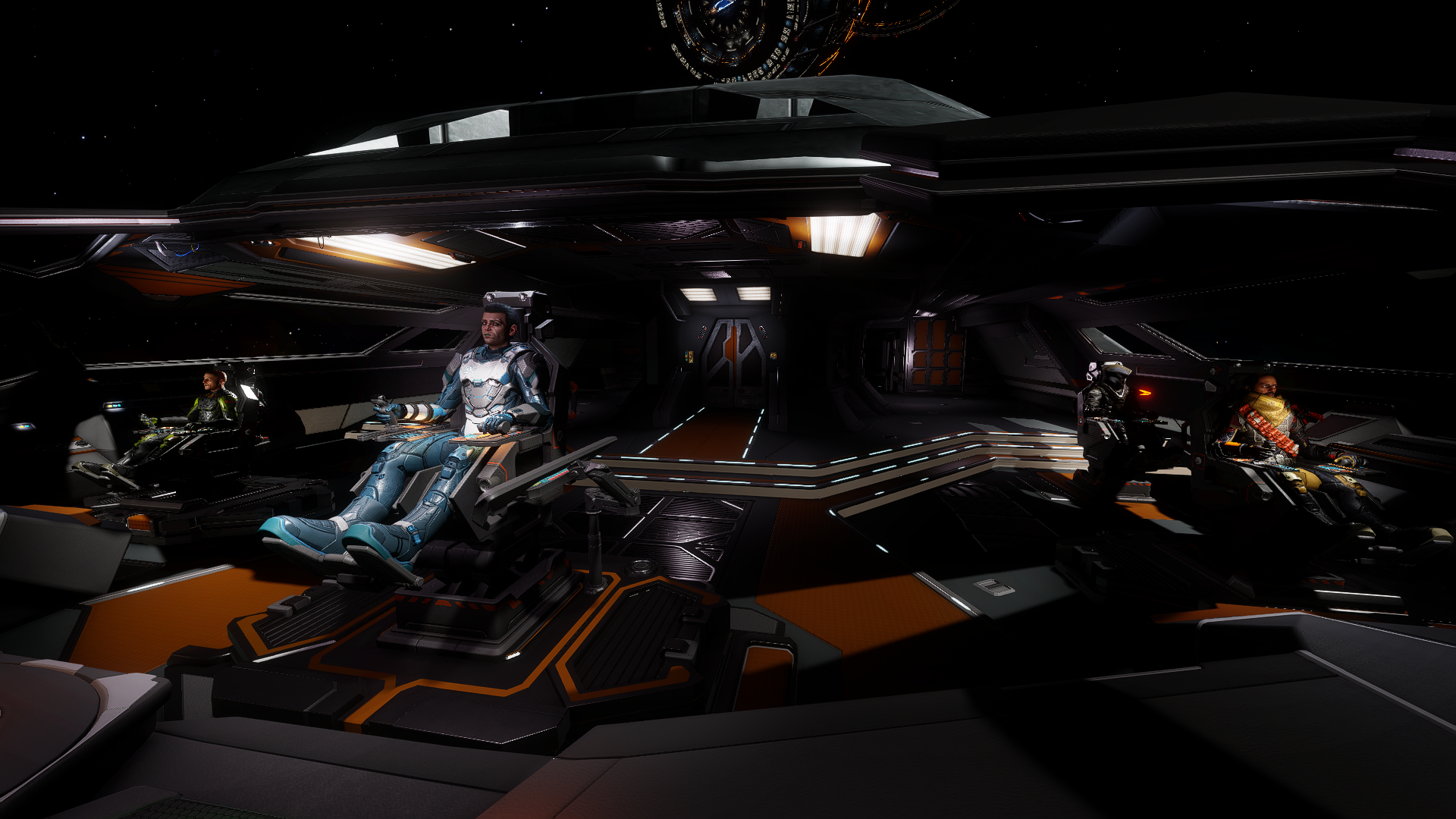 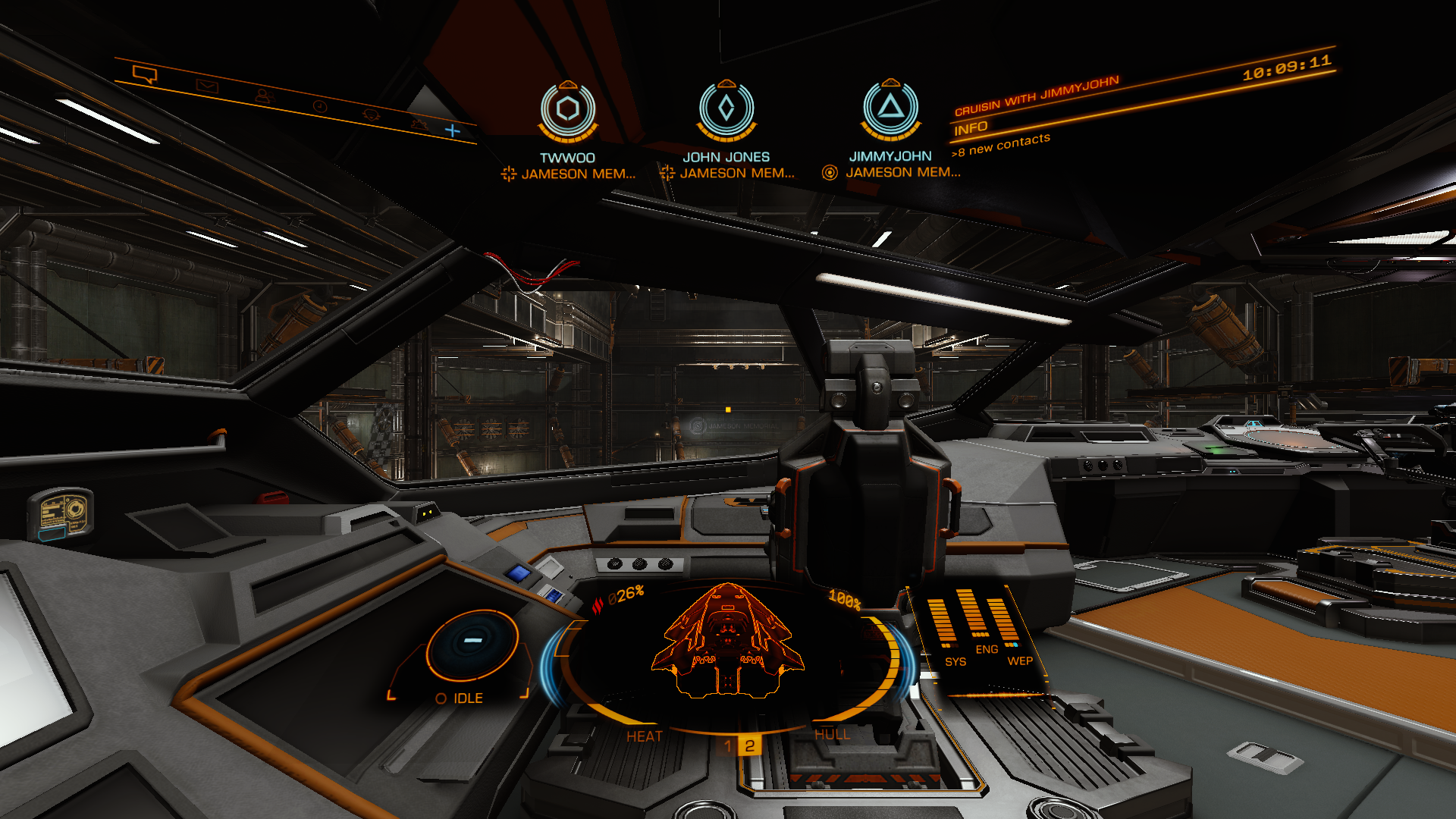 We’d like to introduce Rosa Dayette, one of Odyssey’s upcoming new Engineers based out in Colonia. 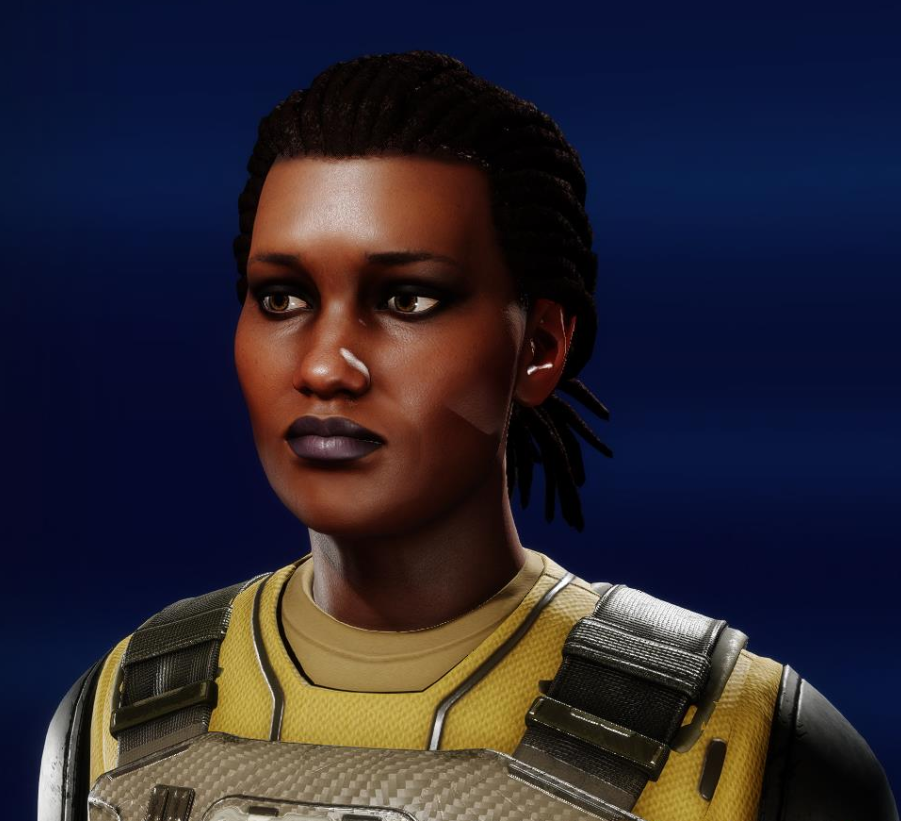 Born and raised in a starport within a feudalist system, Rosa had few obvious skills in her youth. She was an average student, suffered from stage fright and found athletic competition dull. But she did have a passion for mechanical things, fascinated by the constant stream of ships outside her apartment window. With a combination of donated, swapped and refurbished tools, she began to tinker on the gadgets in her home, looking to reverse engineer them to learn how the various components work.

Her natural talent blossomed, and over time she started working on her neighbour’s technology, patching up suits or manual equipment. This became helping out friends of friends, then distant acquaintances; as Rosa approached adulthood people from across the station would turn up at her door with things to fix. Her family apartment eventually resembled a workshop.

And yet she would rarely charge people credits for her time. Her enjoyment of the work and tendency to trade skills led her to accept favours instead of credits. A fixed datapad in exchange for homecooked meals. An upgraded power coupling for free apartment cleaning. Word of Rosa’s talents reached a local businessman who operated a suit supply store. An experienced mechanic himself, he offered Rosa an opportunity to help out at his shop in return for some second-hand suits, weapons and other equipment. Rosa accepted, drawn by the chance to examine far more interesting gear than the home appliances and commercial technology she was used to.

After many happy years of this arrangement, her mentor passed away. What little he had to bequeath was given to Rosa, along with a hand-written note asking Rosa to leave the starport and pursue her dream of a full workshop. Rosa did so, announcing to her friends that she would seek employment with an engineer. As word spread throughout the community, a collection was held to fund this new venture; the many Rosa had helped so selflessly, for so long, gladly contributed. To Rosa’s astonishment, it was just enough to establish her own workshop in Colonia.

Rosa found her local celebrity discomforting, having felt that helping the community was a responsibility rather than something notable. Yet deep down she recognises that she could have made a comfortable living from her talents, but chose to remain true to her principles. Now she enjoys total autonomy in a new community, excited by the opportunity while missing her friends dearly.

Work is still ongoing to expand mission features for Odyssey with the aim to increase mission diversity and create stronger links between the in-cockpit and on foot gameplay. We hope to share more on this soon.

Added social spaces to Megaships. This will allow us to position a base for on-foot services, such as Vista Genomics and Pioneer Supplies, anywhere in the galaxy.

As with previous development updates, what we’ve shared today is just a snapshot of what we’re working on. We will be sharing more details on the content mentioned above, further bug fixes, performance improvements and of course more as-yet-unannounced content in further monthly development updates and across our other channels.

Powerplay (Just a couple for now but we’re thinking about it!)

Can No Longer Be Reproduced:
The following issues are no longer reproduceable in Update 7. We believe this is due to other work carried out on associated code and that these issues are now fixed.
If you encounter these issues again following Update 7, you can let us know via Issue Tracker.