Previously, an update added quality of life improvements. Unfortunately, many players are still experiencing several issues while playing the game.

Today’s World of Warships Legends version 1.76 will fix a few of these issues.

Are you brave? Because Early Access Italian battleships are only for courageous captains! You can get any of the four listed below in dedicated Italian Battleship regular and big crates (the guarantee system is active for the big ones—a ship drops at least once per every 20 containers). Tier IV Premium battleship Giulio Cesare is also available in the big crates to further expand your forces. Tier VII Vittorio Veneto is arriving in the next update to mark the branch moving to the tech tree.

The new line brings a new mechanic: Semi-AP shells for secondary battery guns. These new shells deal high damage when penetrating armor and no damage in case of ricochets or no penetration. SAP shells do not cause fires or splash damage, and due to detonation on contact, they’re unlikely to score citadel hits.

If you’re looking into further expanding your Regia Marina range of ships, don’t miss a discount on Italian Premiums during the first week of the update. There’s, of course, some icing on the cake—all-new cruiser Gorizia, while BB Roma is coming back, too! She will be obtainable for 750,000 Global XP.

We’ll take a closer look at these mammoths in a special blog post in the coming days. 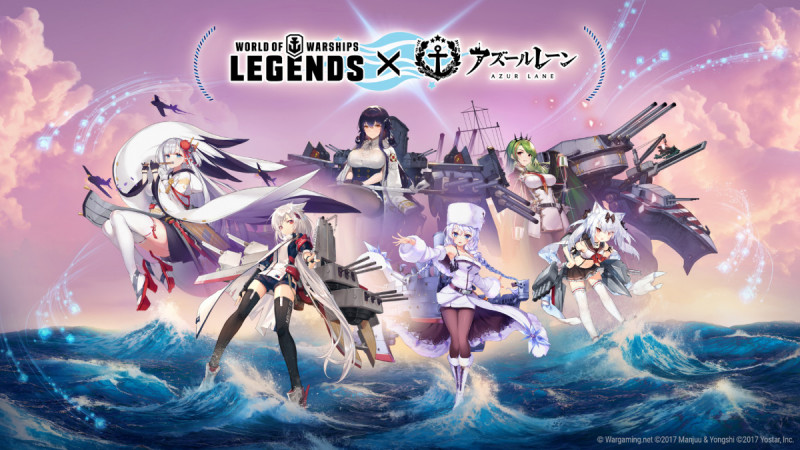 The wait is over—reinforcements are here! The new update brings the third wave of our collaboration with Azur Lane, available from February 7. This time, the content batch includes six Commanders with unique voiceovers, three ships and the same number of skins, plus a couple of all-new flags. The Commanders are available both standalone and through special crates. The Commander range includes:

The ships and skins are connected to the same characters. The ships arrive with the likes of Cleveland-class Montpelier, Yukikaze, and Avrora, while the skins are presented by Azuma, Shoukaku, and Littorio. The Littorio skin goes with Roma, which is going to be available in the Store for 750,000 Global XP.

Importantly, two ships are different from their prototypes. Montpelier turns quicker but shoots slower than Cleveland; AL Yukikaze differs quite a bit by betting on her main guns—they traverse and reload faster, while her torpedoes have increased range but are slower and easier to spot.

All things Avrora are available through a dedicated free bundle that includes the ship with the Northern Parliament flag and a special mission that offers the Commander herself as a reward.

We’ll cover the newest part of collaboration in detail in an upcoming blog post.

The headliner of our latest campaign, German Tier VII Premium battleship Brandenburg, is close to the Bismarck class but has more guns, coming in with a total of twelve pieces of 12 inches (305 mm). She also has more secondary turrets—that’s a lot of firepower!

With 100 milestones over 5 weeks and the catch-up mechanic enabled, here’s what you can get:

Rewards you can get without the Admiralty Backing:

Value of the rewards without the Admiralty Backing: 15,730 doubloons

Additional rewards you can get with the Admiralty Backing (2,500 doubloons):

Total value of the rewards with the Admiralty Backing: 69,935 doubloons

You no longer need to persuade your friend which console is superior just because you want them to play with you—we’re introducing cross-platform divisions, and, of course, friend lists. Those are going to work exactly the same way as they currently do but just make your friends from the “other side” eligible to add so you can play together! Please note that this feature does not cover mobile devices while that version of the game is in the testing phase. Keep an eye on our blog to stay tuned!

1v1. No carriers. Five seasons with the ship tiers ascending each season, from III to VII. Great prizes, including Steel. That’s all—get out there and prove you’re the best duelist! Importantly, the ship type matching will allow for any combinations, so you can absolutely get matched in a cruiser against a battleship or a destroyer! You can either try to maximize your ship’s built-in proficiency and make sure you’re always on top with a disadvantaged type, or go for a balanced survival build that might have some answers for all comers. Expect detailed information to be revealed down the line in a blog post that will include a breakdown of the prizes. 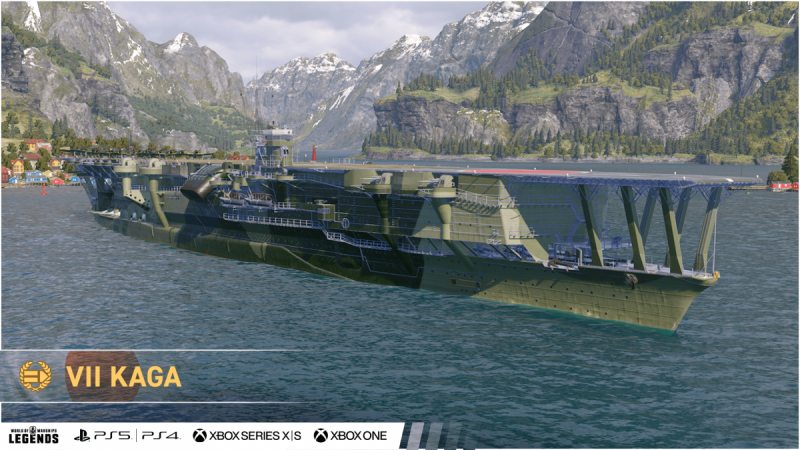 Mighty HMS Minotaur powered us through the holiday update, and it’s now time to take her rightful place among the Bureau Projects. If you already own the cruiser from the Theseus’ Bane campaign, your final Project reward will be delivered in the form of 50,000,000 credits. That’s a mighty haul if we ever saw one!

However, it’s not the only new Project in our research center. Bid your warmest welcome to the first Bureau aircraft carrier! Humongous Tier VII Kaga was an essential part of the marquee Kidō Butai battle group of the Japanese Navy. With her bigger squadrons, she’s certainly worth a try if you want to fill the skies with aircraft!

Please note: Both the Holiday Bureau and Dragon Fleet Projects are getting deprecated as soon as the new update hits. Make sure to start researching them if you want to keep them!

The Year of the Tiger is here, and to honor the noble symbol of the turning calendar, we’re introducing two themed skins—Courage for Loyang and Fury for Huanghe. And yes, Huanghe is a new Pan-Asian ship! You will find more details about the all-new Premium cruiser in the next section.

Dragon, of course, respects the Tiger, and he sends Yellow and Blue Dragons as a sign of his appreciation (a little in advance, but still—a small sign of good intentions goes a long way!). These two ships will be available until the end of the update.

What else? You probably need something to use the skin with, so it’s time to prepare for Loyang arriving for GXP! She will be available for 750,000 Global XP until March 7, but she’s going to leave the Store with the arrival of the next update.

New Ships of the Update 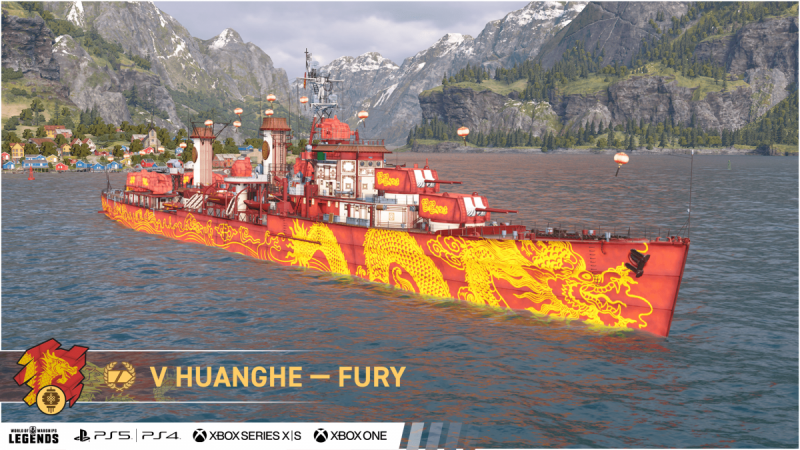 Huanghe is a Pan-Asian Tier V Premium cruiser with Smoke Generator, Torpedo Reload Booster, and couple of other consumables to choose from. For now, she represents the only option to try out a higher Tier Pan-Asian cruiser. With 6.6-inch (152 mm) guns and torpedoes, as well as a wide choice of consumables, including Smoke Generator, Sonar, Torpedo Reload Booster, and Defensive AA Fire (the last three occupy the same slot), the ship is truly flexible—don’t overlook her! 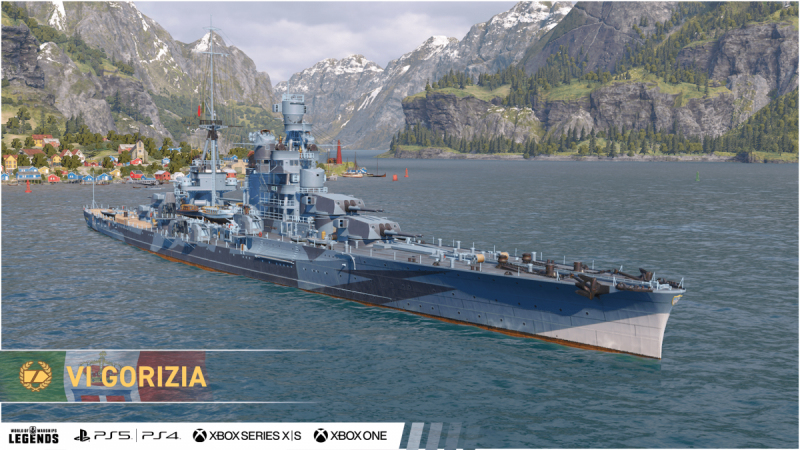 An Italian Tier VI heavy cruiser of the Zara class, Gorizia boasts pretty good armor. Due to the Washington Treaty limitations, she lacks torpedo armament but has access to Exhaust Smoke Generator or Defensive AA fire, Sonar, and Catapult Fighter, which makes her a very versatile counter-cruiser or, to a lesser extent, an anti-air pick.

Both ships will be available on their own or as part of XXL bundles.

Special bonuses for the first win of the update playing each ship from Tier IV to Legendary Tier will arrive in form of Hearts. Celebrate Valentine’s Day by showing your affection to Legends! The following bonuses are going to be active from February 14 through 21:

Additionally, we have permanently set the cost of all existing and upcoming Tier VI Premium ships to 12,500 doubloons, thus decreasing it from the cost of 15,000 doubloons that was in place for some earlier released ships. The compensation for acquiring a duplicate was set to 18,750,000 credits. The following ships currently available in the Store were subject to that change:

One more thing to keep the eye on is the Silver Ninja contest, starting February 7! Send us your best screenshots from this update for a chance to win a ship of your choice from a selected list and a boatload of credits, with patches and a special flag for all participants! We will select five winners with your help—one overall winner and one winner for each ship type category (four categories in total). Follow us on our socials to stay tuned!

Moreover, Domination scenarios with a different map border were added for Greece and Hotspot, both for AI and Standard battles.

The legendary light American cruiser was often dismissed for her performance because it didn’t feel up to par with what Cleveland could achieve at Tier VII. As her popularity has continued to wane, we thought we might just try doing something dramatic. Let’s see if we have overdone it!

*These represent raw penetration values, which must be greater than the armor you’re hitting by 1 mm to penetrate. This means that Worcester is now able to effectively penetrate 29 mm of armor with her HE shells.

The large American cruiser was getting up there in performance, and the decision to dial her back was made quite some time ago. We’ve seen even more of a bump in performance during the last three seasons of Arena. We attribute this mostly to Alaska’s accuracy, which, as you can see, is the target of the current nerf.

German Tier VI cruiser was always the victim of (we feel) misunderstanding and having very popular sisters in Nürnberg and Hipper. We’ve already made attempts to make her more of a universal soldier, and here, we’re giving another nudge to her AP arsenal in the hope of making her a good choice for a few more captains.

When Stalingrad arrived, she started setting damage records that thankfully didn’t get too high up there in average numbers, which is a good indicator considering the caliber of players that currently have her. That said, we’re ready to try and see if those damage spikes can be tempered with a bit of a cut to her AP alpha damage, as well as give more of a fighting chance to any cruisers that face her by making fires more of a nuisance for the Soviet juggernaut.

One more change for the highest Tier: Legendary ships were added to more daily and weekly missions.