A new hotfix for WOW Legends update 1.73 and 1.74 are now available to download on PS4, PS5, and Xbox One. According to the official WOW Legends 1.70 patch notes, the latest hotfix added bug fixes and changes to the game. Today’s World of Warships Legends patch 1.70 (1.015.000) also includes stability fixes.

Previously, an update added quality of life improvements. Unfortunately, many players are still experiencing several issues while playing the game.

Today’s World of Warships Legends version 1.70 will fix a few of these issues.

The all-new Origin of Wisdom campaign brings a lot of in-game items, along with two ships, Siroco and Mainz, over 120 milestones and 6 weeks. Let’s find out the details! 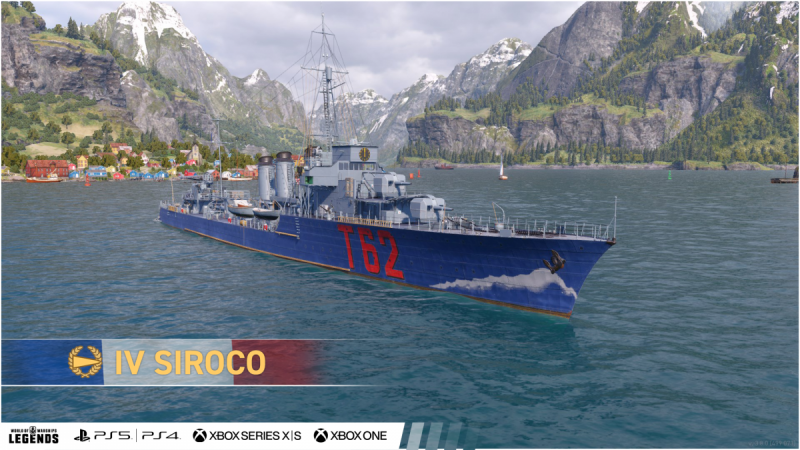 Siroco, a Premium Tier IV French destroyer, awaits you at the milestone 40 of the campaign. With big 5.1-inch (130 mm) guns and decent torpedoes, along with the Main Battery Reload Booster consumable, she’s as flexible as it gets!
However, this is not the same as the Element of Choice campaign, with a choice between two warships at the peak. The Origin of Wisdom is split between two separate Updates (six weeks total), and that’s precisely why you have the opportunity to get two ships from it. Apart from this change and double the number of top prizes to gain, the campaign follows the normal rules. 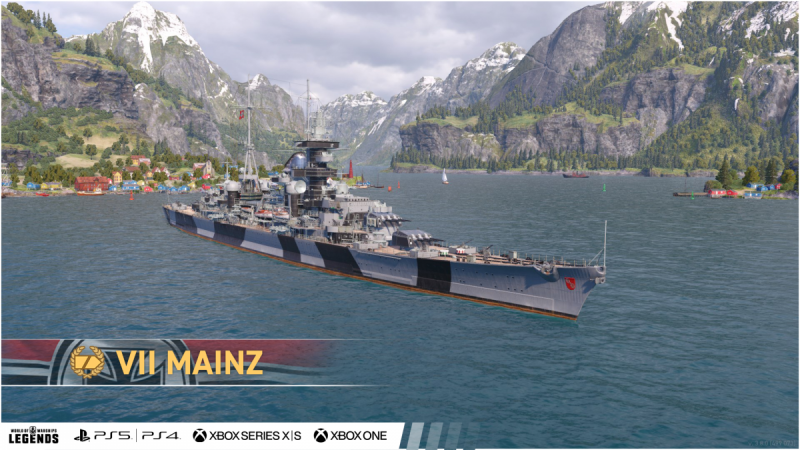 Mainz is a Premium Tier VII German cruiser, docked at milestone 120. With fast-firing guns, improved Sonar, armor as good as a heavy cruiser’s one, and 4×4 torpedo launchers, she’s capable of punching way above her weight!
Here’s the full list of items you can get: 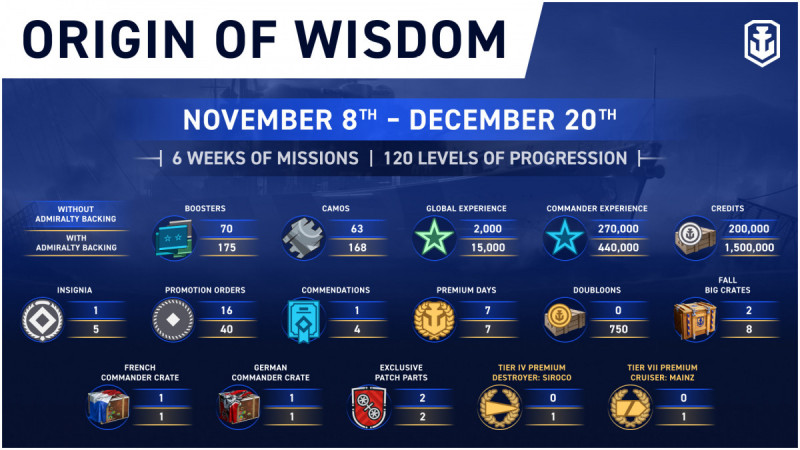 Rewards you can get without the Admiralty Backing:

Total value of the rewards including the Admiralty Backing: 80,165 doubloons

One of the most impactful forces of WWII arrives to Legends: welcome the UK aircraft carriers! They are available right from the start of the Update, so don’t hesitate to learn to fly, and go research them. The tech tree branch follows the recent blueprint, laid out by carriers of other nations: three ships at Tiers III, V, and VII, as well as, of course, a dedicated Commander, available through a chain of mission and for 900,000 Commander XP in the Store. 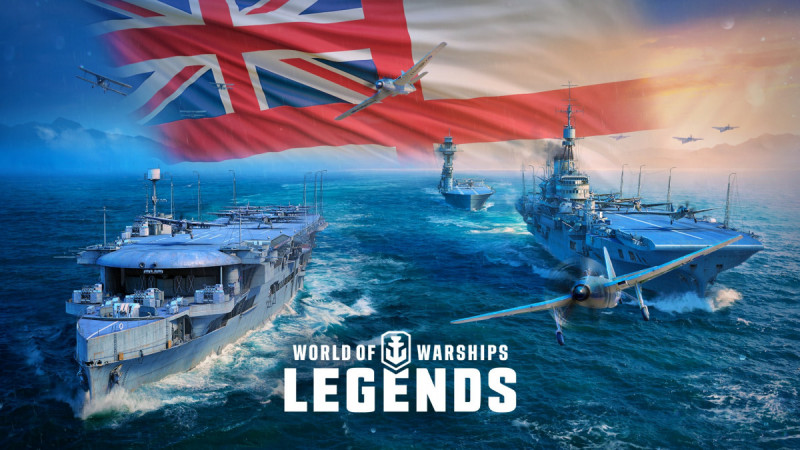 The main feature of British aircraft carriers is their carpet-bombing ability. Their torpedoes meanwhile offer a narrowing trajectory, changing the playstyle compared to other nations.  The immediate damage output for Brits might seem lower than for their rivals, but the fire chance of their bombs is such that they are great at keeping things aflame and often win the war of attrition. 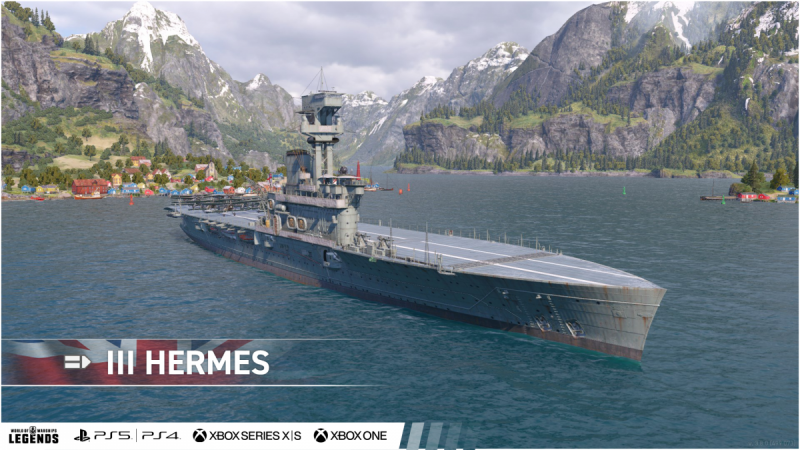 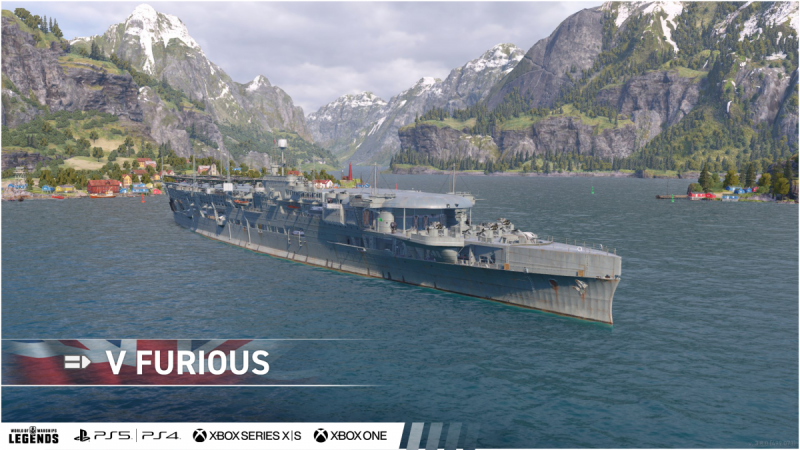 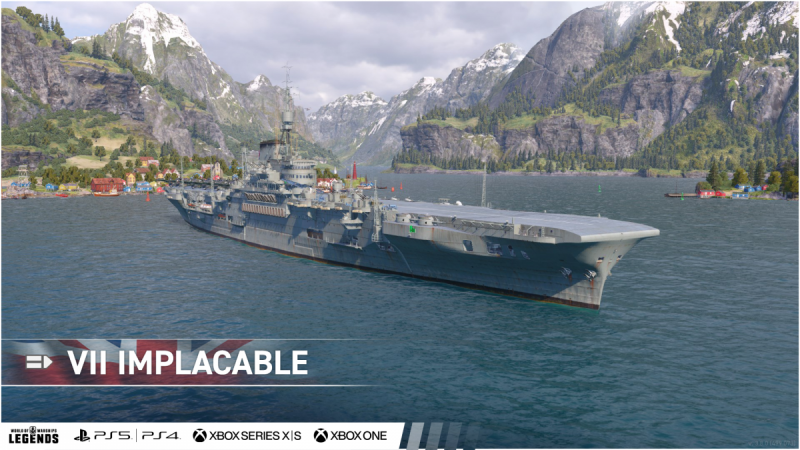 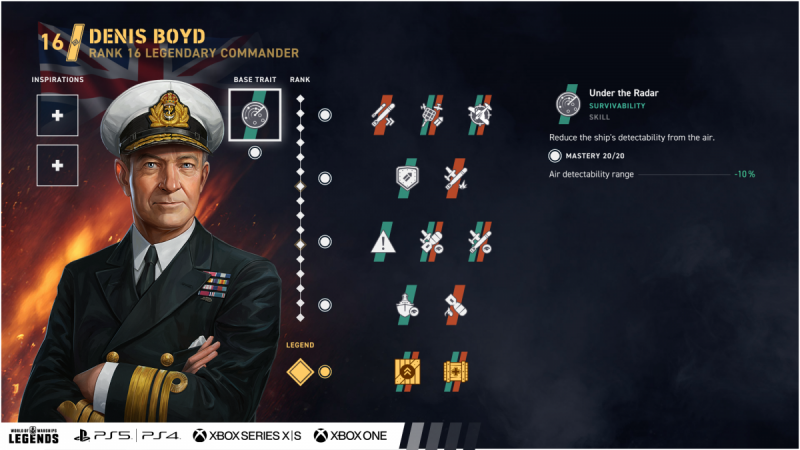 His base trait and Legendary skill look like this:
Base Trait: Under the Radar 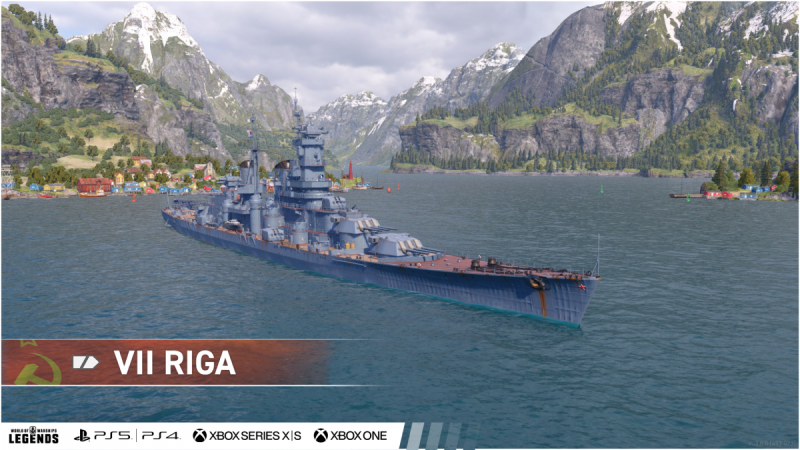 Ships of the new line sport higher-caliber guns and will give you a very familiar feeling if you’re used to the original line. Flat ballistics, Sonar, and respectable torpedoes make for good all-rounders at every tier. Kotovsky, which will give you a taste of the new line, was named after a Russian Civil War Red commander. Gorky was awarded the Order of the Red Banner for exceptional actions while defending Leningrad as a part of the Baltic fleet. Tallinn was acquired from Germany before the outbreak of the Second World War and, in the late 1940s, was due for a refit in line with project 83K, significantly enhancing her batteries. Finally, available as soon as the Update lands, Riga headlines the range, boasting 8.7-inch (220 mm) guns, which makes sense since she’s one of the early designs of project 82 (which turned out to become the well-known Stalingrad). Give the new cruisers a shot and hit us with some feedback! 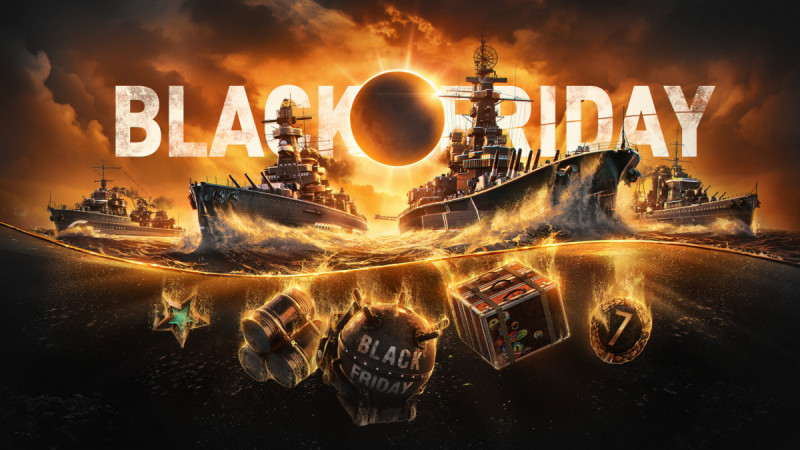 This year Black Friday is as good as ever: Massachusetts, Exeter, Graf Spee. and Le Terrible all make an appearance in black style, with a ton of in-game items available with hefty discounts alongside them.

The second part of our collaboration with Warhammer 40k is here! Adeptus Astartes of the Black Templars chapter clash with Orks in fierce battle on the high seas. Led by Sword Brother Augustin Riegerwald, the Black Templars ride to battle aboard the Cross of Dorn with gameplay centered around effective AP shells. The Orks, with Grotmaz Smart at the helm (he’s real smart, believe us), prepare for battle on the Ship Smasha. Burn and ram, that’s the spirit, and, of course, she’s red, cause da Red goez fasta! Along with these Commanders and ships, you can get themed camos; look for them in the dedicated Eternal War crates. Themed flags and patches can be obtained through collaboration bundles.

Three new seasons with ship Tiers V–VII, no aircraft carriers, and a limit for destroyers: sounds like a good reason to test your skills.
Getting to Rank 1 makes you ineligible to play in the season: you’re too good for that at such point! Please note: In these seasons, while getting a new rank, you don’t get another star, so losing the next game results in going back one rank, except for the irrevocable ones. You keep the star if you were the best player (XP-wise) on the team that lost. A draw counts as a loss for both teams.
Now for the best thing—the prizes! You can see the distribution for each season in the infographics: the better you do, the more prizes you’ll get. However, to get the full picture and exact numbers, make sure to log in to the game once the seasons begin!
The complete ruleset is as follows:
Season 17 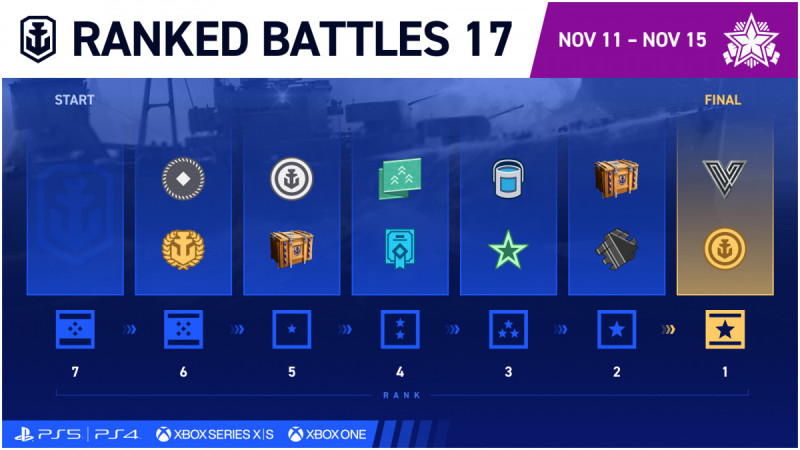 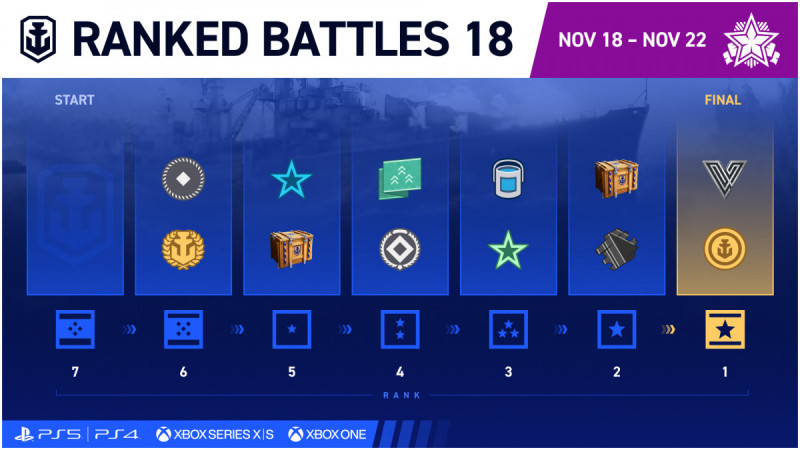 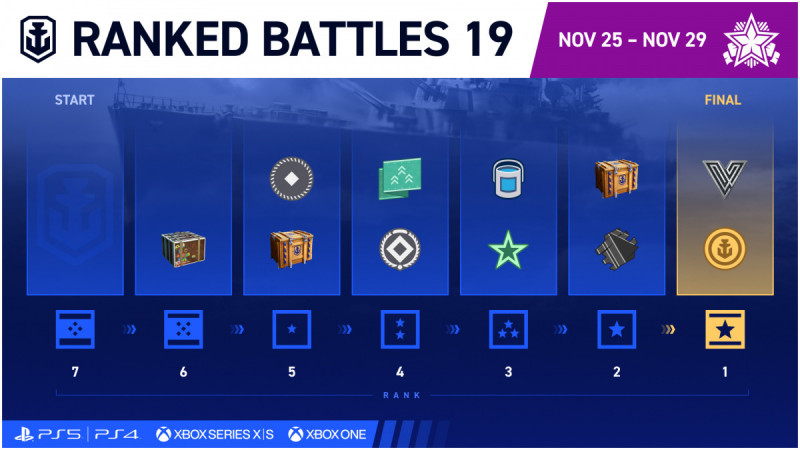 Download free WOW Legends update 1.73 and 1.74on PlayStation 4, PlayStation 5, and Xbox One.