Previously, a day one patch was released with various adjustments and fixes. Recently, a hotfix was also released.

Unfortunately, since the release, players are experiencing a number of issues when trying to play the game. Today’s The King Of Fighters 15 version 1.11 will fix a few of these issues.

Resolved issues where the game would freeze during Story Mode.

Disconnections
・Resolved issues where some players were incorrectly thought to have disconnected
during a match.

・Can now no longer receive replays (Replays that can’t be replayed) from different
versions.
・Replays now default to being public.
*For those who wish to private their replays, please visit the settings panel.
Rooms

PARTY VS
・Upon triggering an Extra Match, the HP of the anchor will now be fully replenished.
*Anchor HP will transfer regularly during all other times.
Trial Mode
・Resolved issues where in some trials, cancelling into Super Special Moves at a certain
・timing would not clear the trial

Training Mode
・Added the following guard settings:
Guard first hit
*Can be used to train mix-up/frame trap situations.
Sound Settings
・Changed the button used to open the Sound Settings from the Touchpad to
the □ Button.

Dashing
・Changed the input specifications for dashing.
*Input window, etc., for back stepping is the same as previous.
This is to prevent players from back stepping when trying to block quickly.
Shatter Strike
・All characters now wall bounce the same distance when hit with a Shatter Strike
in mid-air. 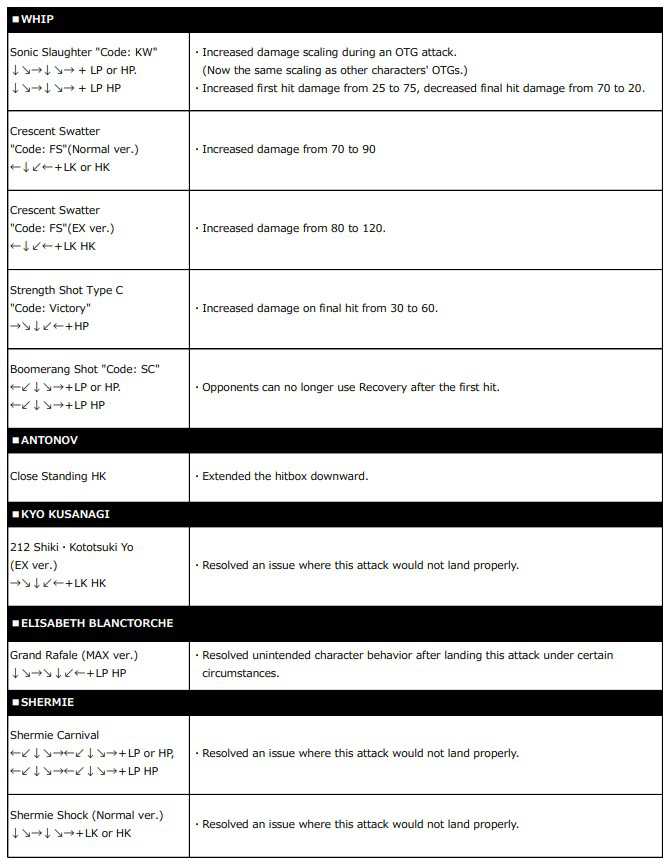