Settlement Survival update 0.84.207.810 is now available to download on PC(Steam) players. According to the official Settlement Survival patch notes, the latest update added Christmas content, performance optimization, and much more.

Unfortunately, players are still experiencing several issues since the release. Today’s Settlement Survival version will fix a few of these issues.

1.Wonder Structure – Giant Christmas Tree added in game. Can send gifts to all kids in town every 5 years. (Can only be built during Christmas Event and remained in map after event.)

2.Blueprint Structure – Snowman added. Can be built on roads and slightly increase health of citizen in the scope. (Can only be built during Christmas Event and remained in map after event.)

4.During Christmas Event, Christmas Trees will be spawned in wild in normal mode and sandbox mode.

7.Recipe – Christmas Hat added in Tailor Shop, made from Wool or Alpaca Wool and Linen or Cotton Cloth. The appearance of Citizens would change after wearing Christmas Hat. (Item can only be crafted during event, but would stay in inventory even after event.)

8.Christmas BGM during winter added. (Will be removed after event.)

9.Snow effect added on Main Menu. (Will be removed after event.) 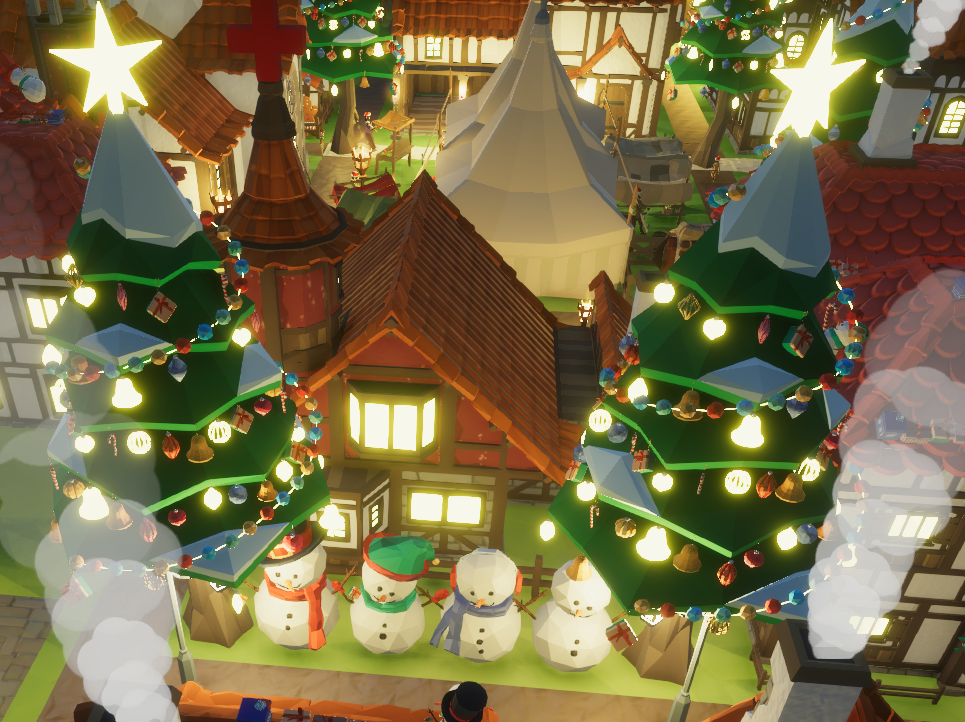 1.Harvest: When triggered, the field crops will be larger and more productive this year.

2.Sandstorm: When triggered, a sandstorm would spawn on map and keep destroying trees, buildings and people along the way. Trees will reduce the scale of sandstorm.

3.Animal Plague: When triggered, a plague would break out in a pasture, and lead to the death of animals inside. Remember to separate your livestock in advance to protect them.

4.Earthquake: When triggered, it has a chance to create mountains on the map, scare away wild animals on the map, and destroy old houses.

5.Floods: When triggered, the water in river will devour the town, destroying most of the plants. 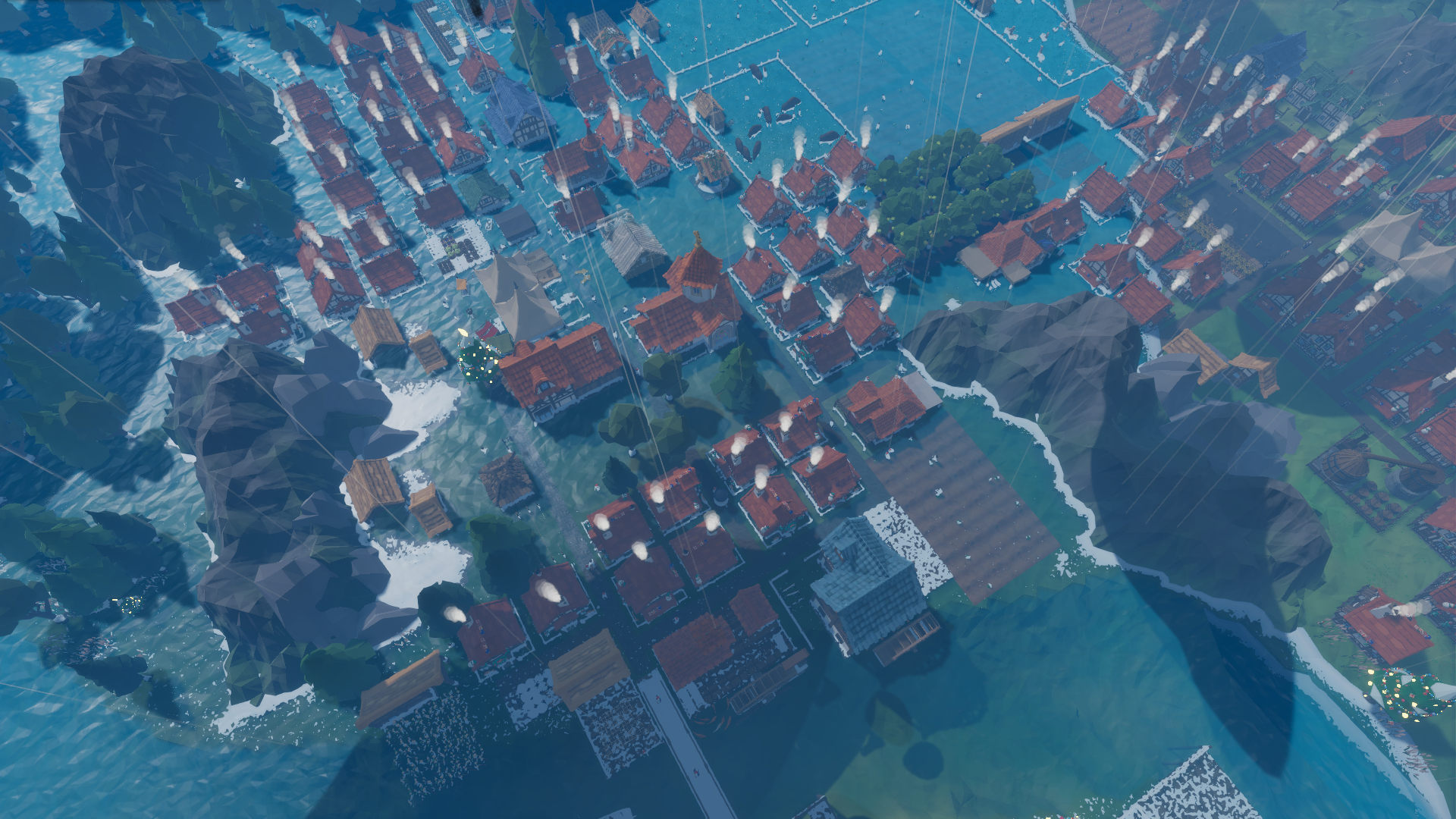 3.Added Active Event – UFO. (Click the UFO to trigger this event when it is passing through your town.)

4.Added Function – Hide Trees. Press H to hide the trees when they are blocking your view.

5.Added Shortcut key for in-game window by the Title.

6.Added Function – Fuel can be banned now in Resource Management.

7.Added display effect of the Upgrade: Campfire for tent.

11.Optimized the display of mod creators’ name in game.

12.Optimized the AI performance of citizens’ messing around.

13.Optimized the translation of Russian.

15.Optimized the scrolling speed of the names of structure.

16.Optimized the item icon of sapling. 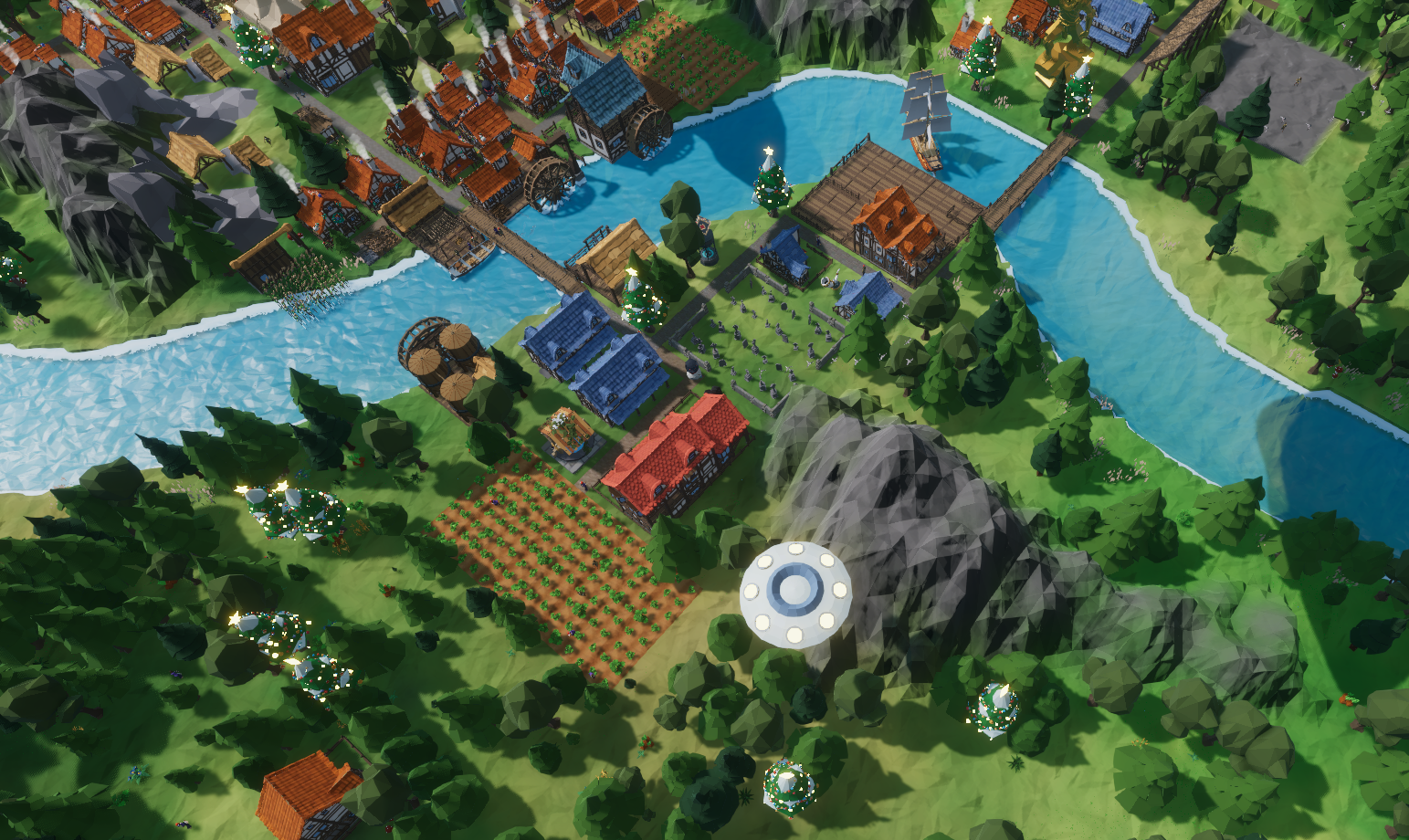 1.Fixed the issue that the amount of item changed into 1111 after deleting the 0 in purchasing number.

2.Fixed the issue that disasters won’t be triggered even they are showed in event indicator bar.

3.Fixed the issue that travelling merchant will pull his cart sideways.

4.Fixed the issue that text is longer than the display area in some languages.

5.Fixed the issue that the text in building info of pasture is missing.

6.Fixed the issue that the entrance of Nursing Home is wrong again.

7.Fixed the issue that the text of some events in Russian is missing.

8.Fixed the issue that some text prompts are missing.

9.Fixed the issue that the gate of Large Trading Post will flash.

10.Fixed the issue that the Boiler Room will increase citizen’s health.

2.Added random events, MOD needs to synchronize configurations in HardMode.xml (new events cannot be triggered if they are not synchronized)

4.Fuel disablement is added, MOD need to synchronize configuration in Items.xml(can’t disable fuel if not)