PowerWash Simulator update 0.7 is now available to download on PC (Steam). According to the official PowerWash Simulator patch notes, the latest update added two new career mode jobs, field of view options, and the much-anticipated launch of the professional class of power washer.

Since the last patch, players are experiencing problems with the game. Today’s PowerWash Simulator patch 0.7 will fix a few of these issues. 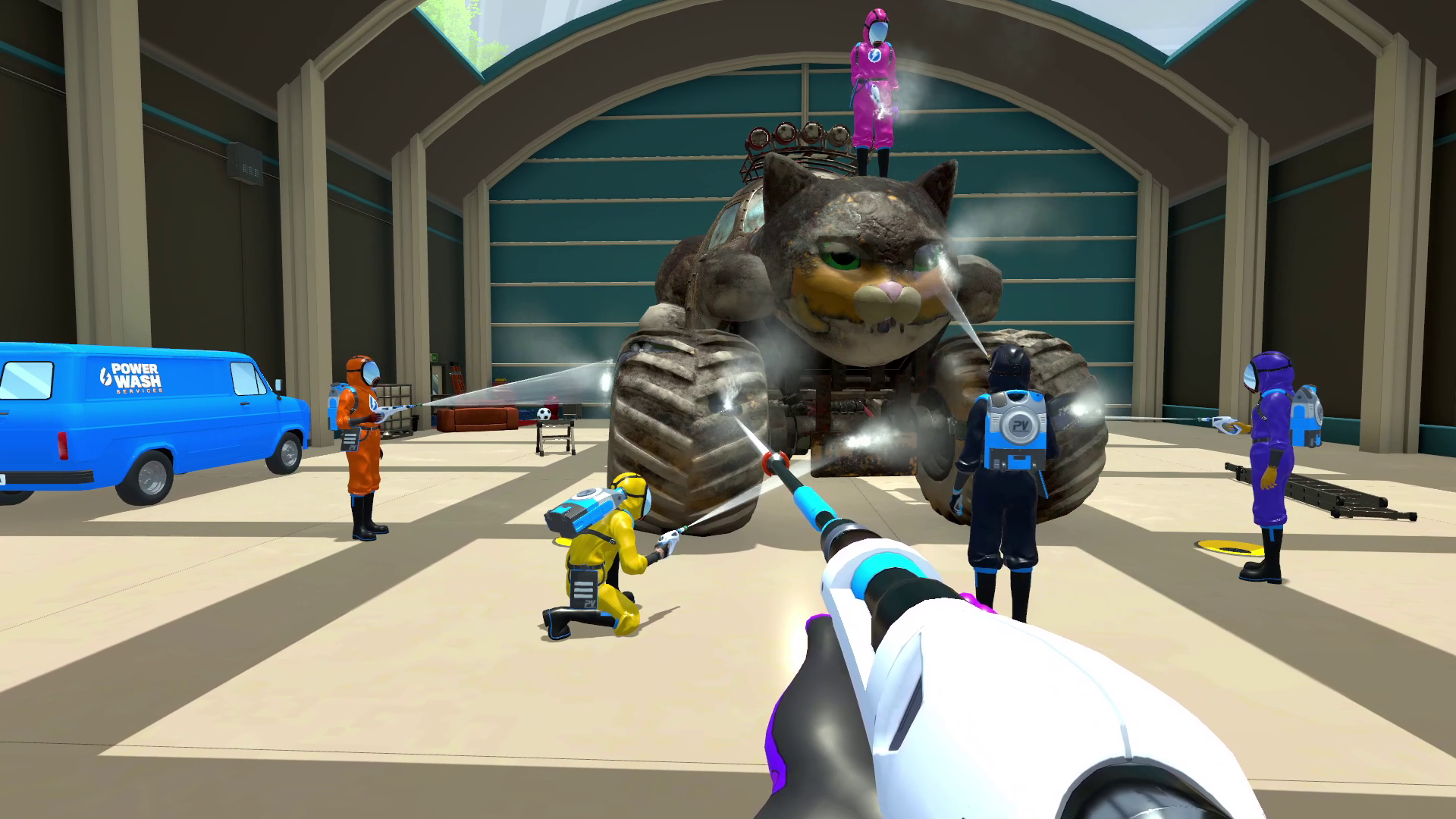 The FOV slider is something we have been wanting to add for a long time to help reduce the chance of motion sickness and as a general quality of life improvement. The implementation wasn’t as simple as it may seem, with a coder having to be dedicated to it to make sure that it didn’t break the washing and was as seamless as possible.

If you do struggle with motion sickness we suggest putting the FOV as high as possible and also enabling the always-on crosshair. We hope this helps!

This game mode is comprised of the Host and an assistant. Only the Host will earn cash and make progress through the career. Assistants are limited to the use of the same equipment the Host has access to, but can’t use soap.

To join a player you must be friends on Steam then simply go to career mode, start a job, return to the tablet (the game menu), enable the hosting in the top left corner.

The friend can then connect from the join tab to the top right in the career mode section of the menu.

Host a game in Free Play mode and you can invite up to 5 friends to join you in washing any jobs you have completed in Career mode. You can use any equipment you have unlocked.

To set this game up, follow the same steps above as the career mode but from within the Free Play section! 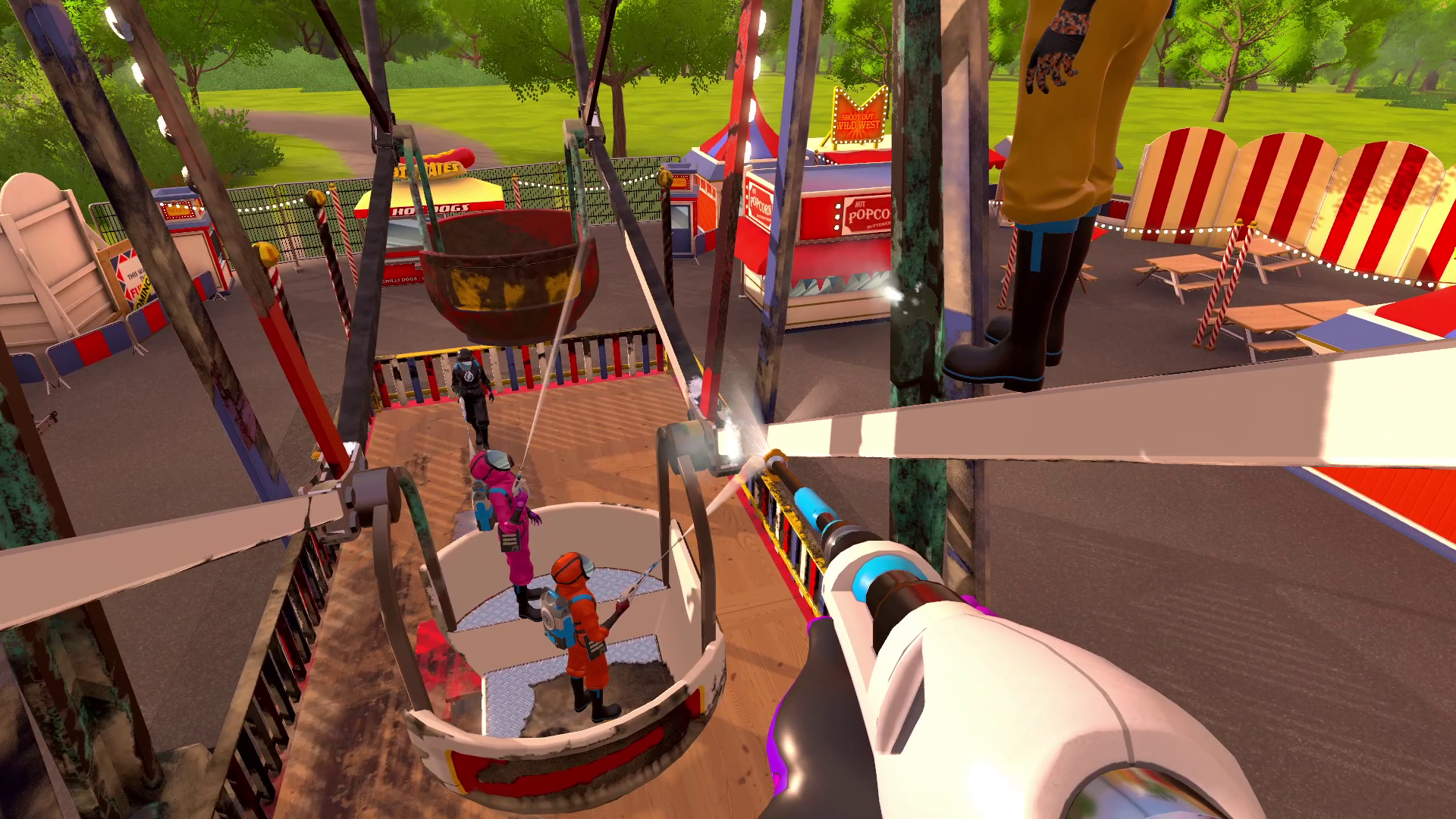 This is in a Beta state and we want as much feedback and community input as we can get so please do share. Currently, there are also a few known bugs that you should know about before diving in:

Appearance and progress of partially washed areas may not always be identical between the host and the client. If the job appears to be complete to some clients but isn’t we’d suggest the host goes on the dirt find trusting their info on the details menu. The Host is the source of truth; if you find yourselves in a debate over whether or not something is clean, trust the Host.

If the host terminates a session, then re-enables it without leaving the job, they will be invisible to any clients that join. We’ve worked hard on making a clean player model, so we’d strongly suggest avoiding this one unless you want to play a stealth-clean minigame. 🙂

Some performance issues on larger levels for the Host when playing with 6-players. This will vary in severity depending on your rig. We’re working hard on improving this as it isn’t where we would like it to be.

If the Host and a Client simultaneously pick up a ladder and the Client attempts to place it, the Host’s interactions will break and you’ll need to relaunch the session. Same with multi-ladder scenes where two players attempt to simultaneously place a ladder in the same spot. We wouldn’t suggest trying to recreate the classic Lady and the Tramp spaghetti scene with ladders.

Rapidly joining, washing, leaving & rejoining a game will cause that Client to be out of synch with the Host’s cleaning progress. There is no berry to cure confusion in PWS!

If several players are washing a larger job and a new client attempts to join it can take a very long time or even cause a time out. We’ll be working on improving this.

Careless use of ladders may cause other players to become trapped between them and a wall or some other object. Doing this will require the affected player to leave and re-join or the host should restart the session. This is not a suggestion to troll your friends, we see the look in your eye!

When you’re hosting and a client tries to join you, if you attempt to change jobs or quit, then they’ll time out. Please wait until your friend has joined before moving on to another level.

Hosts may need to open and close the tablet to update their appearance if a client has joined the game. PowerWash blue is the new black?

The timelapse is shared from the host to the clients at the end of a job. It can be quite a lengthy process to download it even with fast connections which we’re investigating. It should be OK for the Host to move on to the next job if you don’t want to wait for it.

Quitting the app with a session in progress may cause a frozen loading screen. It’s best to end/leave any multiplayer session before you quit.

Having a turbo nozzle equipped looks a little… unusual. Let us know what you think!

You can still boop yourself out of bounds using the scaffolding. I hope that’s the last time we write that. We’ve added some kill boxes to catch and respawn you, but depending on the velocity we just discovered that you may bypass them. We weren’t factoring in that you enter velocities similar to a certain blue hedgehog