PixARK update 1.141 is now available to download on PC and PS4. According to the official PixARK 1.141 patch notes, the latest hotfix comes with some minor gameplay changes. Apart from this, PixARK patch 1.141 also includes stability and performance improvements.

Previously, the a big game update was released with various quality of life improvements. Unfortunately, since the release, many players were experiencing several issues while playing the game. Today’s PixARK version 1.141 is expected to fix a few of these issues.

New Gameplay: A Fantastic Beast and Where to Find It

It is a skeleton war horse burning with the flames of hell. Legend has it that the skeleton horse is the mount of the knight of hell, and is the most reliable partner of the knight. It can fly to the sky and dive into the sea like walking on the ground, and the energy from hell also gives it the power of eternal life.

Right click- Sacrifice: unleashes the flames of hell to inflict continuous damage to enemies within a certain range (damage value correlates to the HP of the enemy, while damage upper limit correlates to the percentage of melee damage of the skeleton horse)

‘C’ button – path of flame, activates its own hell energy, increases its own movement speed by 50% and melee damage by 30%. Moving will leave a hell flame in place, enemies near the hell flame will take continuous damage (1-50 dmg/0.5 sec)

Fire creatures are immune to the above skills

Magical Crystal Berry: The food favored by skeleton horses that replenish their hell energy. It can be crafted at magic workbench with a dark Magic Stone and a magic berry.

Where to find it?

Upon the arrival of Halloween, so do all those naughty Pumpkin Soul Reapers out there trick or treating. Hurry up and fight them off!

During the event, Pumpkin Soul Reaper can be found in:

Defeating it will drop:

Scent of the Pumpkin 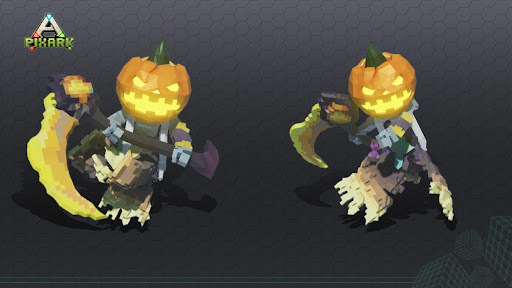 With Halloween fast approaching, we need plenty of pumpkins not only to decorate our homes but also to use them to exchange gifts! Hurry up and call your buddies to plant pumpkins together!

Defeating Pumpkin Soul Reapers will drop pumpkin seeds, which can be used to plant pumpkins.

New skeleton costume set can be exchanged at the Tailor’s Workbench with:

Remember the Scarecrow costume from before? They can be exchanged at 50% discount!

Old Events ARE BACK!

Old Items ARE BACK!

Download free PixARK update 1.10 for PS4 and Xbox One.