A new Madden 20 update 1.12 released for PS4 and Xbox One players. According to the Madden 20 version 1.12 changelog, the new update brings a new Madden mode, new Superstar X-Factor & Superstar Abilities and more. Apart from this, the latest Madden NFL 20 update 1.12 also includes stability and performance improvements.

Previously, a big update was released with new features, balancing, gameplay changes and a big list of bug fixes. Unfortunately, since the last patch, many players are still experiencing several issues while trying to play the game. Today’s Madden 20 update 1.12 is expected to fix a few of these issues. Check out more details below.

What is Superstar KO?

Superstar KO is a brand new, online eliminator mode for Madden 20. It is a celebration of football, a game that combines Superstar X-Factors, custom rules, and unique teams with a new, unique stadium and commentary style to provide a brand-new play experience you can’t get anywhere else. It is all about fast-to-fun gameplay, where every play matters, and games that can last from 30 seconds to 10 minutes. It always presents you interesting choices, whether it be about how you build your team, or how you overcome or take advantage of mismatches. But most of all, it is just fun. We’ve been working on this in secret for a while, and now that that cat is out of the bag, the entire team can’t wait to play with you.

You’ll each get a chance to score in phase one, Superstar OT, and if you are still tied, you can settle the score in a brand-new house rule called Tug of War. The play on the field is dominated by Superstar X-Factors. You will be given a few to start, as well as the chance to earn (or steal!) more, but best of all, the X-Factors are active from the very first play. If you’ve wanted to see the full power of the NFL’s best, Superstar KO is the place. Finally, they all come together on eight brand new teams developed exclusively for Superstar KO. They have custom playbooks and rosters that give each team a unique flavor. From the air-it-out style of Dot City, to the defensive mastery of Shutdown. Each playbook is created to have strengths and weakness that create interesting mismatches and situations.

Superstar KO takes place in a custom-designed stadium. Like a festival for the best football on the planet, it is in an undisclosed location where players with the X-Factors of today meet the Legends of yesterday, and maybe even some Iconic superfans as well. Calling the action is our DJ and announcer, Tre Mo, who stays on top of the game, but makes sure you know exactly how everyone is doing. The crowd gets into it as well, and they are known to be incredibly vocal. It is a vibe where fun rules, big plays are the norm, and you are never far from the action. Winning is exhilarating but losing never hurts—just jump back in and build a new team to take the crown. Finally, you can expect us to keep updating Superstar KO as the year progresses. We’ve got a bunch of new rules, players, and ideas that will keep the game fresh. But first, let’s get into how you play. 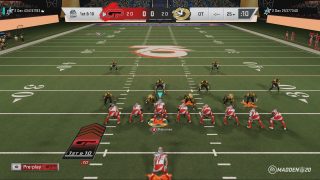 How Do I Play Superstar KO?

Once you come into Superstar KO, you have your first choice. You can play 1v1, 2v2, or 3v3. Each queue is unique, and you will match up with others who are playing with the same number of players. For solos, just click the play button. Squads will play once everyone you’ve invited or matchmake with is ready.

Madden 20 update 1.12 for PS4 and Xbox One is now available for download.