Hunt Showdown update 1.45 for PS4 and Xbox One is now available to download. According to the official Hunt Showdown 1.45 patch notes, the latest update added various quality of life improvements and fixes. Apart from this, today’s Hunt Showdown console patch 1.45 also includes a long list of bug fixes.

Unfortunately, players are still experiencing several issues since the release. Today’s Hunt Showdown version 1.45 will fix a few of these issues.

Hunt Showdown 1.45 Patch Notes for PS4 and Xbox One

Mr. Orwell Chary is looking into ways to give the AHA advantage in the Hunt and is looking for donations from only the most experienced Hunters. Every day after finishing their missions, players will gain bloodline XP that will make them eligible to give tribute. Once certain thresholds are met, offer blood for Mr. Chary’s Dark Tribute and be reimbursed* with one of many rewards including: Hunt Dollars, Blood Bonds, Hunter slot, Bloodline XP, Equipment, Upgrade points, Legendary item instance, Legendary item unlock, or the exclusive Dark Tribute Hunter Bad Hand: Bad at faro and worse at poker, John Robertson was determined to find glory and gold at a card table. But he was fated to become the Revenant, and he lived as he died – making the best of a bad hand.

There are 4 thresholds of XP that the player needs to reach:

Players who do not have enough experience to reach the final threshold may make a deal with Mr. Chary by paying him Blood Bonds but remember: Players can only do the final Tribute after reaching the first 3 thresholds.

Progression resets every 24h. If the player used and unlocked all attempts, they can’t offer blood until the next day, when clock “resets”.

With this update, we are bringing a new feature called “First Bounty Extraction Bonus”. This means that players can earn bonus XP and Hunt dollars for their first successful bounty extraction with each hunter. The bonus applied is as follows:

This bonus is a fixed percentage that will be added to the total XP and Hunt Dollars earned during the first mission where you successfully extract with the bounty.

This reward is not limited to once per day, but once per Hunter each day. Whether it is an existing hunter or a new recruit, the first successful bounty extraction with each hunter in a given day will grant this bonus.

Like other deadeye variants this weapon has been modified with a side mounted Deadeye scope making it easier to hit those longer-range shots. This new variant can also be paired with the Deadeye Scopesmith trait.

This innovative design includes an addition to the trigger guard in the form of an extra finger hold. This grip provides an extra point of leverage, making it much easier to cock the hammer of the weapon. The barrel has also been shortened to reduce weight which allows for even better ergonomics while the shooter is charging the weapon.

This means the Rate of Fire is significantly higher than the Base Scottfield Model 3, however the shortened barrel reduces the weight at the front of the weapon which results in higher recoil and a decrease in hip fire accuracy. Since the left hand is used to fan the weapon, the extra finger handle does not affect the rate of fire when fanning this weapon.

This version of the Scottfield adds a stock to the pistol grip, making a much more stable platform for shooting. This drastically reduces the recoil and increases the overall accuracy of the weapon. This addition also provides a more comfortable holding position, making it slight easier to prepare, resulting in a decrease in time between shots.

The top break action of the Scottfield already provides an increase to reload speeds in comparison to other revolvers in the arsenal. The addition of a speed loader mechanism means that the reload is even faster with the Model 3 Swift. These simple devised allow for all 6 rounds to be pre-loaded into them which are then ready to insert into the chamber and reload all rounds simultaneously.

However, this addition means that you can no longer top off this weapon one bullet at a time as all spare rounds must be kept in the speed loader for the next quick reload. This means any rounds left in the weapon while reloading will be ejected and lost to make room for the next load.

It’s important to note that a OHK at these ranges is still not a guarantee. A solid hit with the majority of pellets from this shell will still be required to ensure the OHK.

With Update 1.7.1 we’re introducing the ability to rearrange Weapons and Items on your Hunter while still within a mission. Rearranging your items only takes a moment, and we know it will become second nature to Hunters of the Bayou in no time:

To move or swap items:

Moving and swapping items is limited to their slot categories. Weapons can only move to other weapon slots, same with Tools and Consumables. 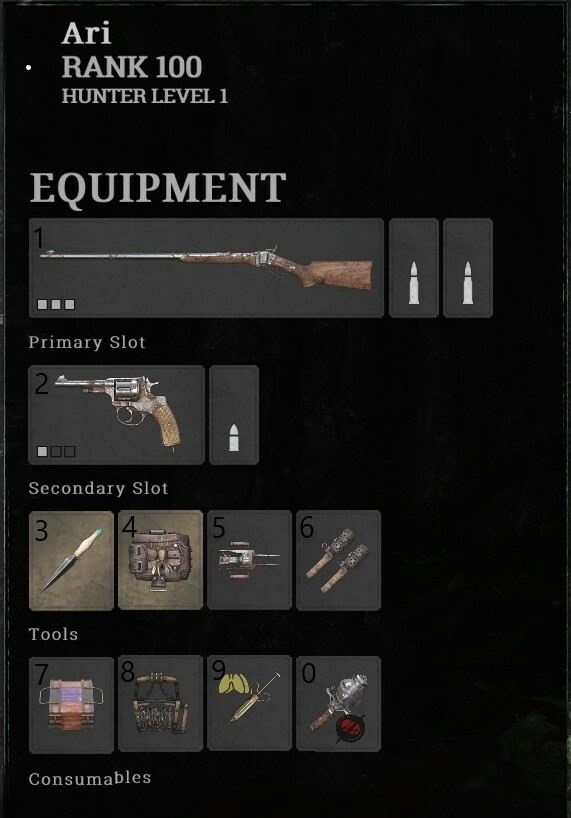 Start by pressing ‘7’ to hold the Ammo box in your hand. Next press and hold ‘0’ to indicate you would like to switch its position with the Flash Bomb. After a short delay, the two items will be swapped.

Since the introduction of the Vetterli 71 Karabiner Silencer, we noticed that the previously released silenced weapons (Sparks LRR Silencer, Winfield M1873C Silencer, and the Nagant M1895 Silencer) would need a slight rework of their design to be more in line with the original “base” weapons. This change is purely aesthetic and should not impact gameplay (e.g., The audible distance of the Silenced Shot)

Added more sandbags to the roof of the Waiting Hall in Lawson Station. This should help offer more cover from all directions while upon the roof. (Community Request)

Addressed a bug where the Vetterli Marksman used the wrong base sensitivity, making the default camera speed faster than other marksman variants

Addressed a bug where, when equipping four consumables, the selection would jump to the first consumable slot and render the reduce button useless