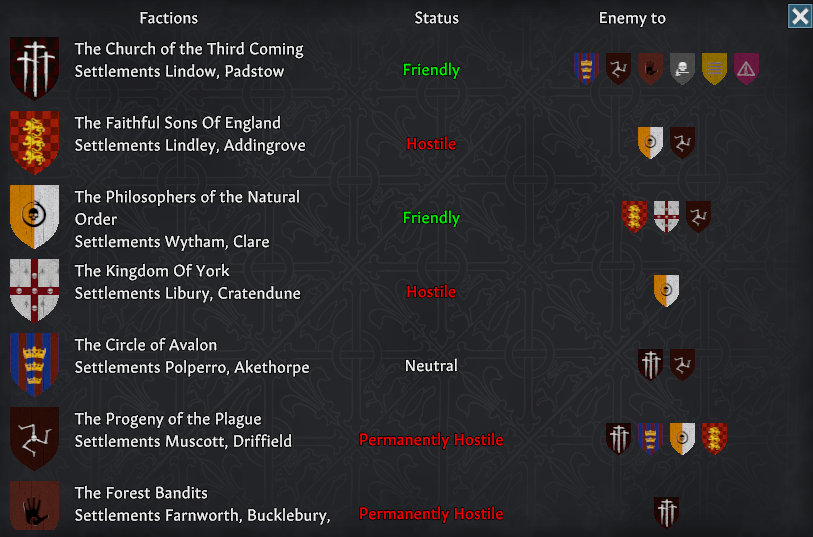 The Faction tab is located within the Historical Records panel in-game. It shows you what alignments you have with other factions and which faction is at war with who. You can change alignment with other factions by trading with them, gifting them things during trading/caravan gameplay, attacking traders, returning runaways or refusing to do so (more info in the event segment!). 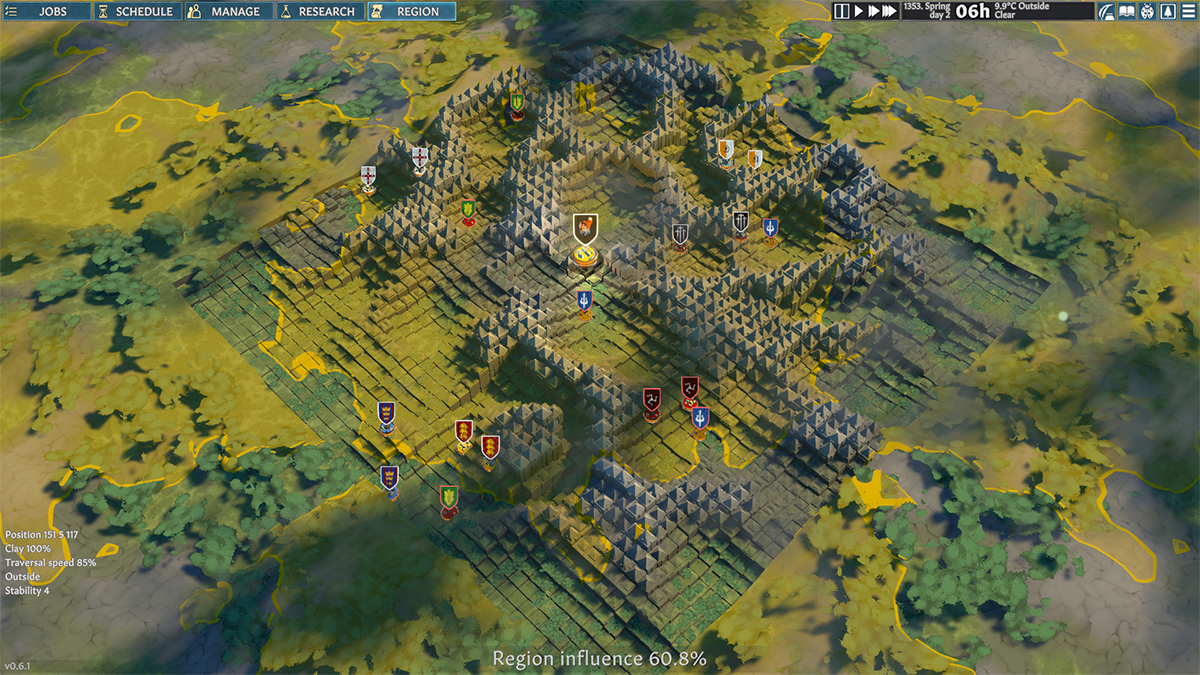 To unlock the Region map, you will have to research “Cartography” in the Research tab. Once you do that, you’ll be able to build a new furniture type – the Cartography Table which will, in turn, give you access to the Region tab. You can now select other settlements on the region map and see their basic information, as well as send caravans to them. 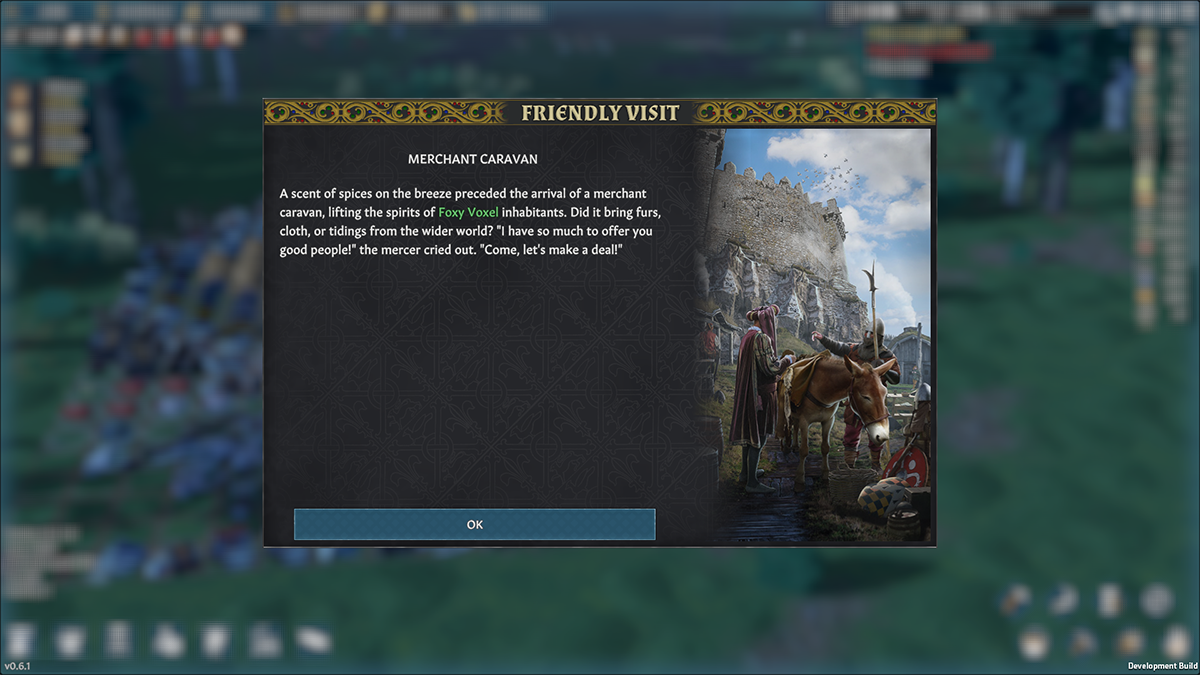 Merchants, as an event, will arrive at the player’s base over time. You can start the bartering process by selecting one of your settlers and right-clicking the trader NPC. Only resources on stockpiles/shelves will be available for trading from the player’s side. 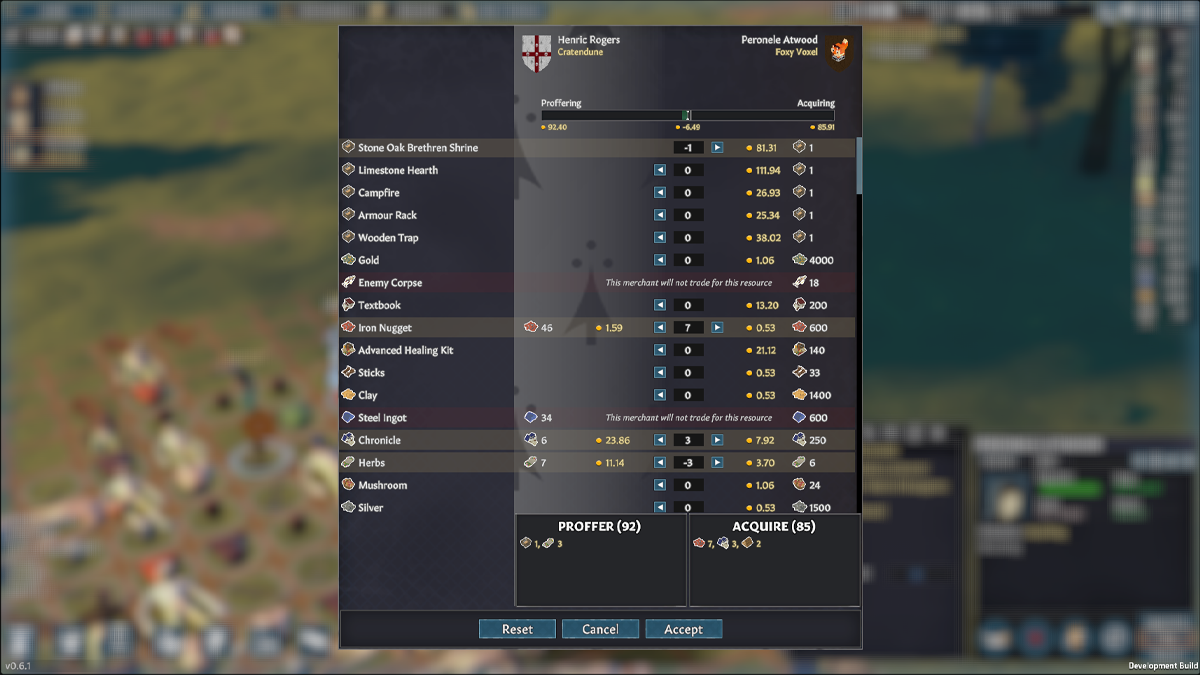 Trading is based on the value system of resources/equipment and the value of each resource differs depending on time of year, merchant, if the player is giving or taking, etc.

You can attack merchants and lose alignment points with the trader’s faction, but be careful – they will usually come with bodyguards. If the merchant turns hostile, both the trader and their bodyguards will act like raiders.

Merchants will not trade weapons/armors/shields if they have neutral alignment with you, and certain traders (like weapon merchants and large goods merchants) will not appear if the player has no friendly factions on their region map.

Right now, the caravan system is only utilized for trading and gifting purposes. Attacking other settlements via caravans is not currently in the game, but will be supported over the course of the development.

You can now send caravans by selecting other settlements in the region map and choosing the ‘send caravan’ option. However, for that to work, you will have to choose which settlers to send and what goods to send with them.

The caravan won’t start if there are no settlers chosen, the mass is too great or there is not enough nutrition for the trip to and from the destination settlement.

Sending a caravan will give you the ability to trade with the settlement when the caravan arrives at the destination.

Bartering with settlements is the same as regular trading, except that the prices are in favor of the player and not the faction.

Caravans can’t return home if the player has bought more mass than can be carried or if the amount of nutrition is not met for the way back.

We’ve also implemented a feature where you can turn almost any production building/furniture/decoration/trap into a pile allowing for the relocation of a structure. Once turned into a pile, it can be moved onto stockpiles or be installed anywhere else (if there is space for it!)

Installing and reinstalling a structure takes ⅓ of the time it takes to build it, but this process doesn’t have a minimum level requirement, nor does it give XP to settlers. It’s also worth mentioning that you will be able to buy some structures (as piles) from merchants, even though they’ve not been previously researched. 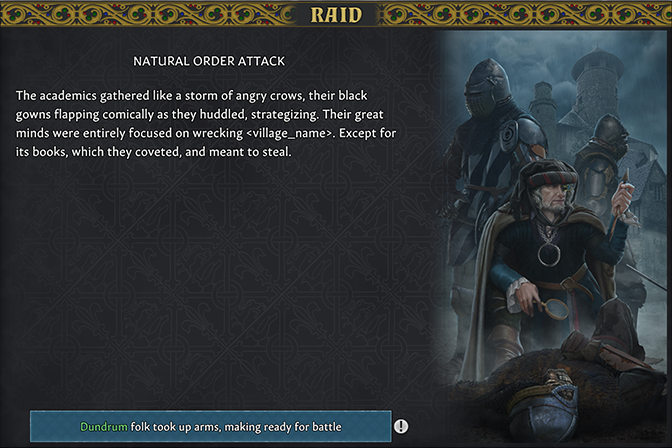 To adapt to newly introduced trading and faction systems, we decided to do some tweaks to events. Beyond introducing new trader events, we’ve overhauled how existing raid events work. Before there were 3x different raid events for 3x different factions in the game. Now there is only one raid event and the faction is chosen randomly from hostile factions.

Dev note: If you load the save that is currently experiencing a raid in the 0.5.31.15 version of the game, that raid will disappear. All the raids that come after that one should work properly.

The Runaway event has a slightly different outcome now. Refusing to give the settler back will not necessarily initiate a raid, but it will set -50 to the alignment with the faction that is looking for the runaway. This can result in the faction potentially turning neutral from friendly or hostile from neutral. 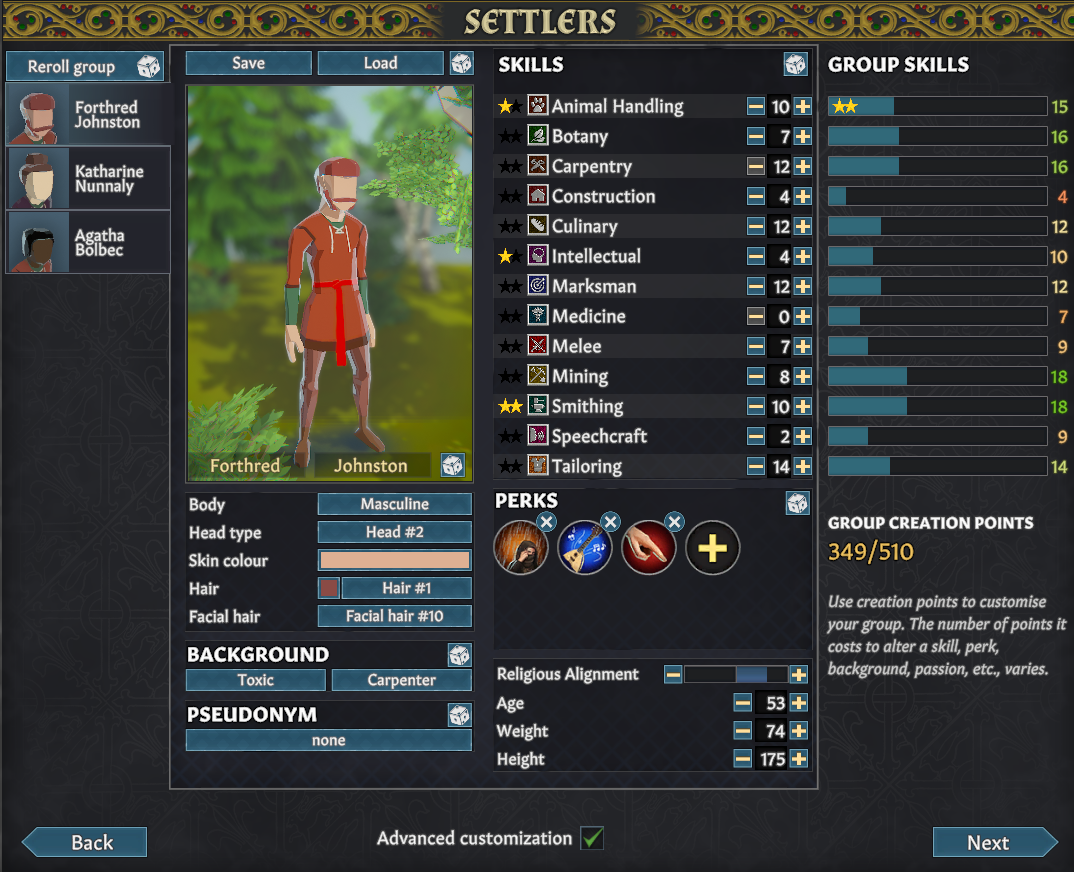 We’ve enabled the option to customize starting settlers if you choose to do so – by selecting the Advanced Customization option, the settlers screen will expand and you will be able to choose things like their looks, backgrounds, pseudonyms, religious alignments, ages, weights, heights, what perks they have and what skills they excel at.

There are some limitations to the creation points used to “build” your settler – they are not infinite. They are randomly distributed to every settler and the players can change where they want those points to go. The number of points it costs to alter a skill, perk, background, passion, etc., varies.

You are able to save your settlers as presets, so you can use them in other scenarios.